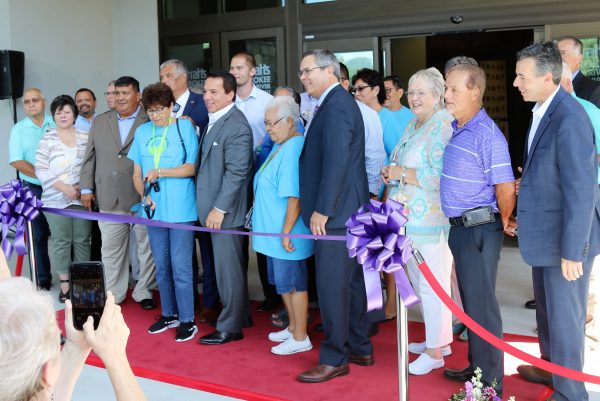 MURPHY – On Wednesday, July 18, a group including tribal elders, tribal, local, and state officials, management and staff of Harrah’s Valley River, and UltraStar came together to cut the purple ribbon officially dedicating the new entertainment complex adjoining the casino and hotel.

Principal Chief Richard G. Sneed spoke at the ceremony and had this to say about the new facility, “The opening of the new Valley River UltraStar Multi-tainment Center is another step forward in the building of a legacy for the Eastern Band of Cherokee Indians and a source of income and commerce for the entire western North Carolina region. What arose as an idea and request from our tribal elders has become a business that will sustain many in our community and region and provide another pastime for those in our communities and those visiting from other parts of the country.  Today’s ribbon cutting is a celebration of a great effort from our tribal leadership, Harrah’s and Ultrastar leadership, and in collaboration with our neighboring communities.”

Tribal Council Chairman Adam Wachacha shared, “It is just an amazing facility, walking up here, bringing my kids here. It is something we will enjoy for years to come. I want to thank the TCGE Board for having the vision to take the bull by the horns and get this added to the existing facility. This team has done a wonderful job of staying above projections which is always a good thing for the members of the Tribe. Anything we build, I hope it can be successful. We hope that this will be a place that people will come and enjoy. I would like to thank the past Councils and the current Council. I am truly blessed to be Chairman, and I appreciate all the support.”

Chairman Wachacha expressed that he hoped that even more ideas and ventures would be realized soon. He thanked the seniors who attended and supported the project. 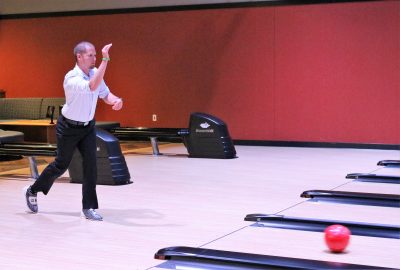 BOWLING: Wolftown Rep. Jeremy Wilson breaks in one of the bowling lanes at the facility.

Harrah’s Cherokee Casino and Resort General Manager Brooks Robinson; Harrah’s Valley River Casino and Hotel General Manager Lumpy Lambert; and Adam Saks, General Manager and Chief Operating Officer of UltraStar Ak-Chin; thanked Chief Sneed, Vice Chief Alan B. Ensley, Tribal Council, contractor Robins and Morton, and their respective teams in finishing the construction of the project. They also gave special thanks to the tribal elders, who they said were a “driving force” in getting the Multi-tainment Center to be a priority for the Tribe.

After the ribbon was cut, everyone was invited in to try out the amenities in the new Multi-tainment Center which is constructed similarly to its sister operation in Cherokee. It features a room full of state-of-the-art video games, sports skill games, and a prize center. The bowling lanes are state-of-the-art as well. There is also pool tables and a dining area. The most notable difference is that the Murphy operation is all on one floor with high ceilings while the Cherokee facility is a two-story facility.

Vice Chief Ensley acknowledged the collaborative effort and the potential for growth. “It was great to see this new addition to the Tribe’s businesses and to share it first with our seniors, who are the reason this idea was presented and became a reality. I congratulate our tribal government, the Cherokee community, Harrah’s and UltraStar for their hard work and collaboration in getting this project on the ground. The tribal communities in Cherokee County and Snowbird will benefit through the jobs available here and will enjoy recreation time here as well. We hope that everyone in the area and those tourists traveling to the area will have a great time at the new Multi-tainment Center.”

The town of Murphy Mayor Rick Ramsey attended the ribbon cutting ceremony and was excited and grateful for the opportunities that the Eastern Band of Cherokee Indians is bringing to his community. “It (the Multi-tainment Center) is absolutely beautiful. I think it is such a great addition to a facility that is already wonderful. I am so grateful that the casino is here. The Eastern Band of Cherokee Indians supports the town of Murphy, the county, the community. We want to be as close as possible to our friends and have a great working relationship going forward.”

Mayor Ramsey said that he has offered an open line of communication with Chief Sneed and members of tribal leadership. “The jobs that this facility has brought into our community and now the bowling alley, arcade, and restaurant brings that much more.”

He said that the town was growing and being recognized nationally due, in part, to the national reputation of the Eastern Band of Cherokee Indians, Harrah’s and UltraStar. He recognized that new businesses and capital opportunities are coming to Murphy and traffic counts are higher due to the influence of the EBCI facilities.

Two North Carolina legislators attended the ribbon cutting and dedication activities that followed. The representative for Haywood, Jackson, and Swain Counties, Mike Clampitt, said, “This (Multi-tainment Center) is wonderful for all of western North Carolina and a great expansion for job opportunities and tourism for the tribe. I think it is a wonderful thing across the board.”

Senator for the 50th District (Cherokee, Clay, Graham, Haywood, Jackson, Macon, and Swain counties) Jim Davis commented, “It is a gorgeous facility, but that is sort of par for the course for the Eastern Band. Whatever they do, it’s done right and done right the first time. This is going to be an incredible addition to the community and for the tribal members and for the people of Cherokee County to come and visit. It is just a continuing effort of the tribe to be good stewards of their revenue.”

The official opening day for the new UltraStar Multi-tainment Center in Murphy was Monday, July 23.