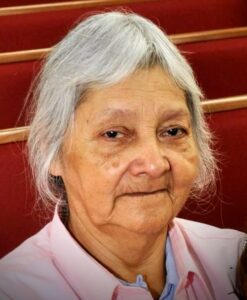 Mollie Welch Herbold, 79, of the Big Cove Community in Cherokee, went to her heavenly home on Tuesday, July 17, 2018 at the Cherokee Indian Hospital.

She was the daughter of the late Adam Welch and Annie Powell Welch.  She was a basket weaver and stay-at-home mother, grandmother, and great grandmother.

Visitation will be held on Friday, July 20 at the Big Cove Baptist Church beginning at 4pm.  Funeral services will be held on Saturday, July 21 at 2pm.   Pastor James “Bo” Parris will officiate.  Burial will follow at the Welch Family Cemetery.  Pallbearers will be Kimsey, Chris, Ronnie, Shane, Tommy, Dennis, and Will.