Kallup McCoy II left Kituwah on the morning of May 14, and a month-and-a-half and many grueling miles later, he finished his journey.  In order to raise awareness about substance abuse and recovery, McCoy, an EBCI tribal member and founder of RezHOPE Recovery and Consulting, ran the Benge Route of the Trail of Tears finishing on June 28 at the Cherokee Heritage Center in Tahlequah, Okla.

“The message I was trying to send to people is we don’t have to be prisoners or confined to our circumstances or to our experiences, whatever that may be,” he said.  “I wanted to show people that just because someone tells you ‘no’ that doesn’t mean that you can’t get to where you want to go.  I wanted to give that hope and inspiration to those that are still struggling with substance abuse or mental health issues.” 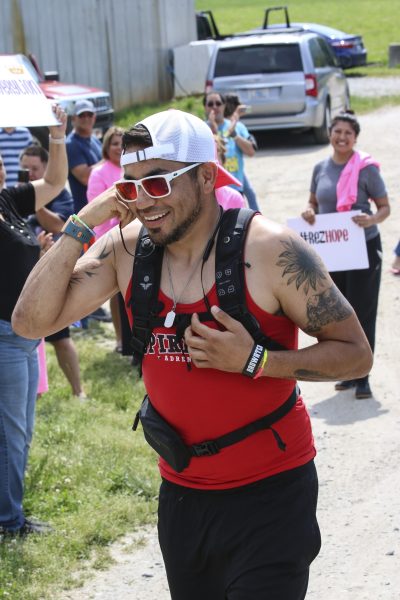 JOURNEY: Kallup McCoy II, an EBCI tribal member and founder of RezHOPE Recovery and Consulting, leaves Kituwah on the morning of Monday, May 12 as he began his retracing of the Trail of Tears Benge Route. He finished his journey in Tahlequah, Okla. on June 28. (SCOTT MCKIE B.P./One Feather)

During his journey, in which he averaged over 20 miles a day, McCoy said he was able to deal with a lot of issues.  “One of the things I carried a lot was my relationship with my dad and how that turned out when he passed and where we were at with our father-son relationship when he passed.  I carried a lot of guilt and shame.  I had a lot of revelations out there.  God was really speaking to me.”

A few days before the end of the journey, he was 18 miles into that day’s run and was listening to Conway Twitty’s “That’s My Job” – a song he and his father listened to together.  “I was literally talking out loud to my dad, ‘Dad, I wish you could be here.  You’d be so proud of me right now.’  And, I look over and see a sign that read McCoy’s Garage…the theme throughout this whole journey was breaking chains…so, I stop for a second to take a picture and then I put my phone back in my bag and start running again and there’s a broken chain laying there.”

McCoy said the main message he would like to give to everyone, including those in recovery, is “Stop putting limitations on yourself.”

Several leaders of the Eastern Band of Cherokee Indians went out to see McCoy finish his run in Tahlequah.  “That’s crucial in recovery is having that support,” noted McCoy.  “We recover in this community, and that’s what we’re trying to do is make this community more recovery-minded and understanding – not just knowledgeable.  It’s one thing to be knowledgeable, but it’s another thing to be understanding and kind and have compassion.”

He added, “For the leadership to come out there and say that they believe in me and they’re proud of me, that speaks volumes to me.”

Tribal Council Chairman Adam Wachacha noted that day, “A few Council members were able to get out there to receive him in Tahlequah after his long journey from Cherokee, North Carolina all the way to Tahlequah, Oklahoma on foot.  It was a recovery for hope.  It was a Christian-led message which I’m very appreciative of.”

Principal Chief Richard G. Sneed said, “I was really moved by a post that Kallup put on Facebook.  And, it was two photos side-by-side – one where he was in the hospital from an overdose and then an image of him out there running and making this journey and really giving hope to people who are struggling with addiction.  It was just such an awesome contrast to see.”

He went on to say, “It’s amazing what God has done in your heart.  For the folks who are in addiction, there is hope…people who have not been directly touched by addiction want to have simple answers to a very complex problem.  These are our sons and daughters, our moms and dads, our brothers and sisters, aunts, uncles; they’re our people. You have put a face on recovery for us, and for that I thank you and I’m proud of you.” 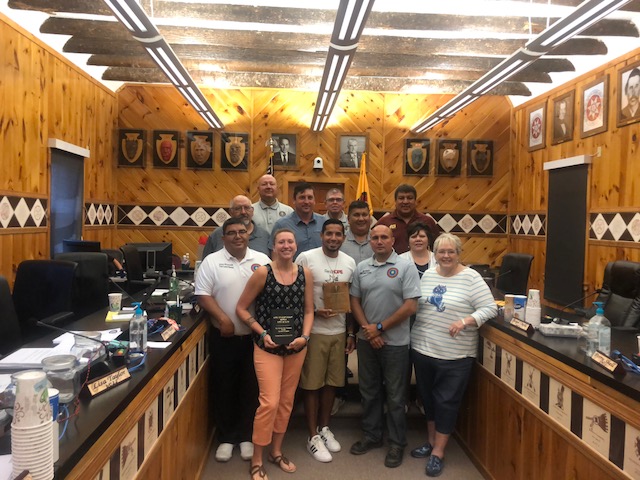