SAN DIEGO, Calif. – Over 2,400 native youth gathered at the 42nd United National Indian Tribal Youth Conference in San Diego, where Miss Cherokee 2017-18 Faith Long was inducted into the third class of its “25 Under 25 Native Youth Leaders” national recognition program that honors Native American and Alaska Native youth. The program, which launched in 2014 and is awarded every other year, recognizes and celebrates the achievements of Native youth leaders under the age of 25, who embody UNITY’s core mission and exude living a balanced life developing their spiritual, mental, physical and social well-being. 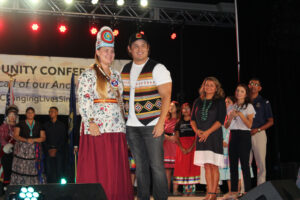 AWARD: Miss Cherokee 2017-18 Faith Long receives her 25 Under 25 Award at the UNITY Conference as other awardees and UNITY officials look on. (Photo courtesy of Jones-Bowman Leadership Program)

The honorees were recognized in front of peer youth leaders at the National UNITY Conference, which took place July 5-9 in San Diego, Calif.  In addition to the recognition, honorees are offered the opportunity to receive hands-on learning experiences designed to build on their individual achievements. Applicants were judged by an independent committee who scored applications based on the strength of the application, nomination form, resume, supplemental information, and potential to impact Native America.

“So many of our Native youth are doing amazing work in Indian Country. UNITY’s 25 Under 25 program is one way of recognizing these young leaders and acknowledging the passion they have to improve their communities,” said Mary Kim Titla, Executive Director for UNITY.   “There was an overwhelming amount of applications from outstanding youth leaders across the nation. We offer our congratulations to the honorees and wish all nominees the very best.”

Long is a Cherokee Youth Council alumna, a current fellow in the Jones-Bowman Leadership Award Program, a Costa Rica ECO Study Tour alumna, an honor student at Carson-Newman University, and an intern working with the Authentically Cherokee division of the Sequoyah Fund.

She started her community activism at the early age of 11 and continues to set the bar for other youth on the Qualla Boundary. “Working with Faith for the past 10 years and watching her grow culturally while serving her community is inspiring,” said Alicia Jacobs, Leadership Specialist for Jones-Bowman Leadership Award Program.   “Her platform is youth empowerment, cultural preservation and breaking the entitlement mindset for the future leaders of the Eastern Band.”

Attending the UNITY Conference was made possible through funding from the Cherokee Preservation Foundation for the Ray Kinsland Leadership Institute, a department of the Cherokee Boys Club.