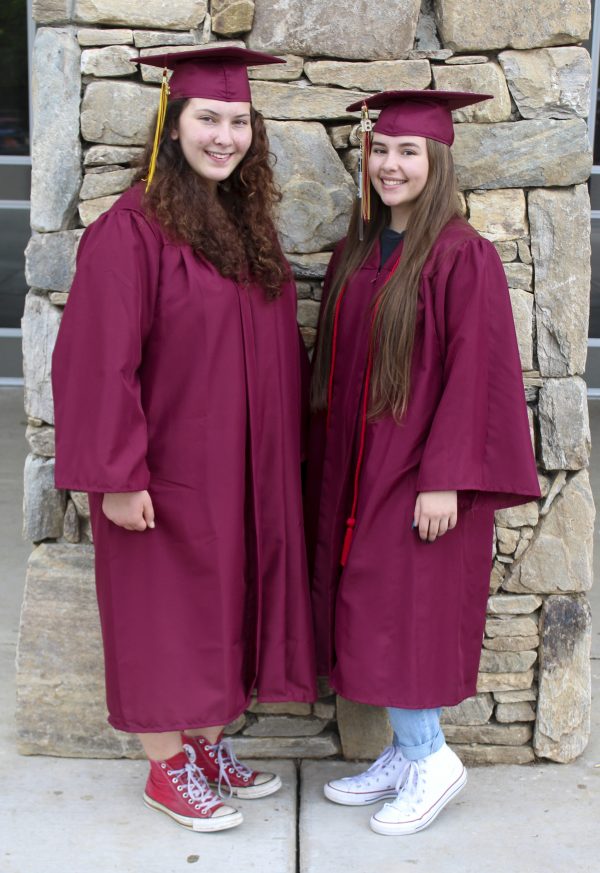 TOP STUDENTS: Scarlett Guy (left) and Robin Reed have been chosen as the Cherokee High School Class of 2018 valedictorian and salutatorian respectively. They are shown at the school following a senior walkthrough at the Cherokee Middle School on the afternoon of Thursday, May 31. (SCOTT MCKIE B.P./One Feather)

Cherokee High School has named its top students for the Class of 2018.  Scarlett Guy is this year’s valedictorian and Robin Reed is the salutatorian.

“It’s really exciting,” said Guy, who is from the Painttown Community.  “As a freshman, I didn’t know what a valedictorian was.  Once I did find out, it just seemed like something far away.”

Guy, who is entering a pre-med program at Duke University this fall with the goal of becoming a neurosurgeon, was involved in numerous activities during her Cherokee High School career including being involved in the TAG and Close-Up programs, playing in the marching and concert bands including two years as drum major, and being on the wrestling team.

She said signing up for honors classes at every opportunity helped her academically.  “If there was an option for honors, I always chose it.”

When asked her final thoughts about Cherokee High School, she noted, “I’m just extremely grateful that it was Cherokee High School that I was able to get my diploma from and be valedictorian of because of all the opportunities that they offer to their students here.  They want every student to do well and be well and succeed.  Because of all of these opportunities and being able to find community in clubs and groups made me stand out as a competitive student to colleges.”

Reed, who is from the Big Y Community, said, “It doesn’t feel real.  I didn’t think that four years ago when we came in that we’d be sitting here today.”

Reed, who is entering the pre-med program at Lincoln Memorial University this fall, said that “staying on track” was a key to her success in high school.  “Just do your work.  It wasn’t hard to do at all.  Just stay on top of everything.”

She played volleyball and softball all four years at Cherokee as well as being a part of the HOSA club and the Close-Up program.

As she prepares to leave Cherokee, she said, “It’s been real.  It really has.  It’s been quite the journey.  It’s been great.  Honestly, it’s been a great experience.  I wouldn’t trade it for anything.  I wouldn’t go anywhere else if I had to go back.”

Of the two students, Deb Foerst, Cherokee High School principal, noted, “Robin and Scarlett are awesome.  I have literally known Scarlett since elementary school and Robin since she was born.  They are just such good girls, and they exemplify what true Braves are from the time they set foot on the Cherokee High School campus engaging in all of the extracurricular activities that they have while maintaining such good habits scholastically.  These are the two that we want out front.  We’re excited for their futures.”