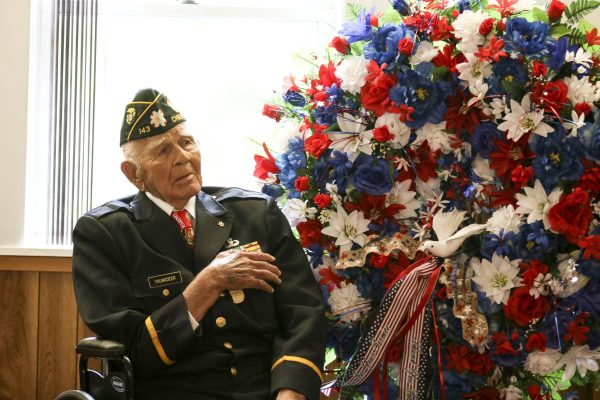 MEMORIAL: Former Principal Chief Robert S. Youngdeer salutes the flag during the playing of the National Anthem at a Memorial Day observance event, hosted by the Steve Youngdeer American Legion Post 143, at the Yellowhill Baptist Church on the morning of Monday, May 28. (SCOTT MCKIE B.P./One Feather photos)

Those who made the ultimate sacrifice in the defense of the United State were remembered and honored at a Memorial Day event hosted by the Steve Youngdeer American Legion Post 143.  Due to rain, the event was moved inside from the Yellowhill Veterans Cemetery to the Yellowhill Baptist Church on the morning of Monday, May 28.

“None of you here today need to be reminded of the reason for this day, but what about the general public?” asked Post 143 Commander Lew Harding during his opening remarks.  “Judging from what Memorial Day has come to be, simply another day of shopping, perhaps the answer is no.  We believe that this special day of remembrance should be a civic obligation and regarded as such by veterans and non-veterans alike.  By honoring our warriors lost in battle, we preserve their memory and thus, their service and sacrifice we honor.”

He went on to state, “Memorial Day is a day for exclusively honoring those who died while serving in uniform in wartime – 227 years, 65 military actions, 1.4 million lives lost, some of which are lying in Yellowhill Cemetery today.  The death of a sailor in the Gulf is every bit as significant as a Marine killed on Guadalcanal in the Pacific during World War II.  Such distinctions are irrelevant.  Whether done individually or collectively as a nation, it’s the thought that counts, and we thank you very much for being with us today.  As American war veterans rapidly disappear from society’s notice, there are fewer and fewer standard bearers to carry the torch of remembrance to our younger generation.”

Following a musical presentation by Legionnaire Phyllis Shell, U.S. Army, who sang “In Honor of Those Who Served”, Principal Chief Richard G. Sneed, a U.S. Marine Corps veteran, spoke, “Today is a today of remembrance.  It is a day to memorialize those men and women who have given their lives to ensure that freedoms that each of us enjoy continue on for generations to come.  Today is set aside to pay great honor and homage to their sacrifice.  It is a day for each of us to meditate upon, with great consideration, the high cost of our freedom.”

HEROES: While Chief Sneed reads a list of names of EBCI tribal members who were killed in action, Legionnaire Phyllis Shell rings a bell in their memory.

Chief Sneed added, “May we never take for granted the rights, the privileges, and the opportunities that we enjoy each and every day as American citizens.  We call them heroes, but if you could ask them, they would simply say that they were just doing their duty.  There were our brightest and our best and were willing to lay down their lives for this great nation – humble heroes preserving the ideals of freedom and democracy.”

Chief Sneed then read the following list of names of EBCI tribal members killed in action as Legionnaire Shell rang a bell in their memory:

Col. (Ret.) Bob Blankenship, U.S. Army, did several patriotic readings followed by a placing of a memorial wreath by himself; Chief Sneed; and J.D. Arch, a U.S. Navy veteran who serves as the EBCI veterans service officer.

The program concluded with a rendering of honors to the fallen heroes by the Post 143 Color Guard and a benediction by Big Cove Rep. Perry Shell, a U.S. Army veteran. 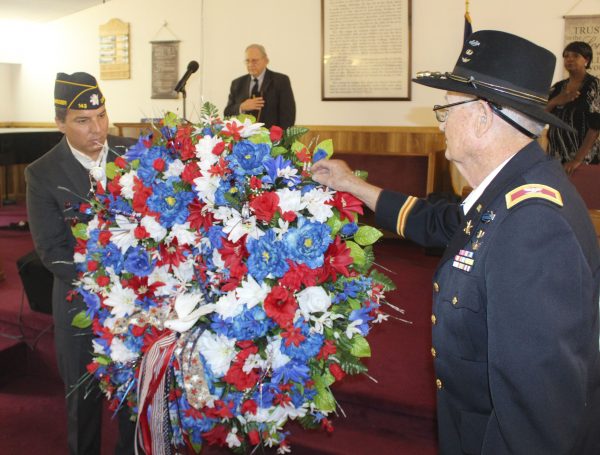