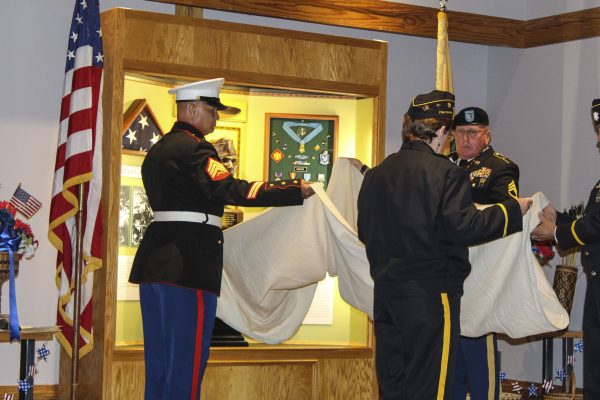 PFC Charles George, an EBCI tribal member, received the Medal of Honor posthumously after throwing himself on a grenade to save two fellow soldiers during the Korean War.  George passed away from his injuries on Nov. 30, 1952 near Songnae-dong, Korea.  An exhibit at the Museum of the Cherokee Indian honoring the heroism of George opened officially on Memorial Day, Monday, May 28.

“To honor this young man, I think it’s significant, especially on this Memorial Day, because so many of our brothers and sisters have lost their lives serving their country,” said Lew Harding, Steve Youngdeer American Legion Post 143 commander, at Monday’s event.  “Few, a very few, receive the honor that this young man did.  We are so proud of him as Eastern Cherokee, and we’re so happy that you’re here to witness this event to honor PFC Charles George, United States Army.”

The main focal point of the exhibit is a bronze bust of George which was made from the mold formed and created by the late James Spratt, a U.S. Navy veteran who made the life-size bronze statues of George that stand proudly at the Charles George VA Medical Center in Asheville and the Cherokee Veterans Park.  Also included in the exhibit is the U.S. flag they draped over George’s coffin at his funeral, his medals including the Medal of Honor, and the entire text of his Medal of Honor citation.  The display case itself was made by Jay Cooke of Sylva.

During the event, a final roll call ceremony and a Cherokee Challenge call were done, and the Warriors of Anikituhwa did the Cherokee Warrior Dance. 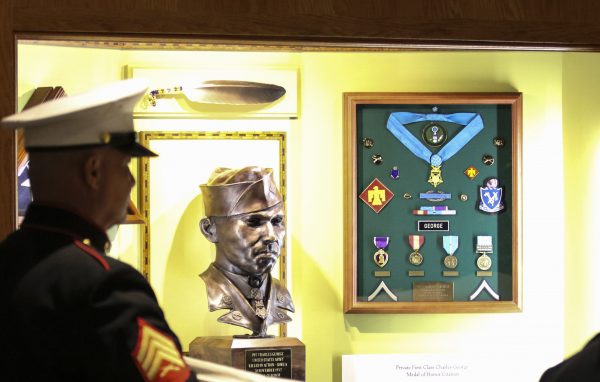 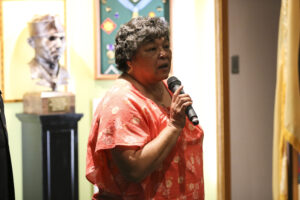 FAMILY: Patty George Buchanan, an EBCI tribal member from the Yellowhill Community and the niece of Charles George, speaks during Monday’s event.

Warren Dupree, a member of Post 143, served on the Charles George Memorial Fund Project Committee which served to have the two statues and one bust made.

“When that Chinese hand grenade came into the trench, Charles saw what was happening, and he only had seconds to react,” Dupree noted.  “He knew what he had to do.  He shoved Marion Santo with so much force that Marion Santo later recalled, ‘I thought the grenade had detonated and I had been hit’.  As he shoved Santo out of the way with a violent thrust, he yelled to Armando Ruiz, the other soldier, to get out of the way.  Then, Charles turned and threw his body on the hand grenade to receive the full blast to his body.” 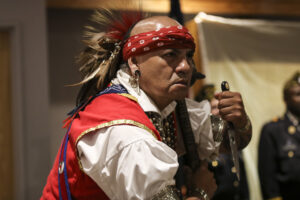 WARRIORS: Sonny Ledford, a member of the Warriors of Anikituhwa, performs the Cherokee Warrior Dance in honor of PFC Charles George.

Col. (Ret.) Bob Blankenship spoke of George’s early life stating he was born on Aug. 23, 1932 in Cherokee to Jacob George and Nola Squirrel George.  “We know from his record that he was inspired by the heroic military service of our Cherokee people.  He knew of the pride the Cherokee had for service in the military of their people.  It was this pride that on Nov. 30, 1952, the son of Jacob and Lola George found himself in the service of his country in a violent war battle on a hilltop near the tiny village of Songnae-dong, Korea.”

He continued, “Songnae-dong lies a short distance, midpoint from Seoul and Inchon, Korea.  This was the famous Inchon landing area of the war and is also very close to what has been known as the demilitarized zone, since that is where the truce was signed to cease the battle.  It was here that Charles George gave his all in the service of his country, thereby bringing the highest honor on his own military service, his family, his country, and the Eastern Band of Cherokee Indians.”

Bo Taylor, Museum of the Cherokee Indian executive director said, “First off, I want to thank the men that don these uniforms…a lot of people today are sitting around, grilling, and they’re having fun, but you’re here.  I want to thank the people that are sitting here today that came out to honor Charles George.  Without these men and women that have served their country, we would not have the grills and the races and all this stuff that we have…some gave it all.”

To view or purchase photos from this event, visit: https://onefeather.smugmug.com/COMMUNITY-and-NEWS-EVENTS/2018-Community-and-News-Events/PFC-Charles-George-exhibit-opening-at-Museum-May-28/