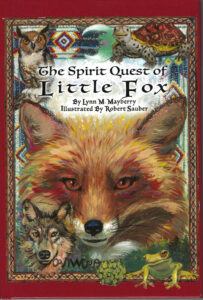 “The Spirit Quest of Little Fox” by Lynn M. Mayberry manages to weave both Cherokee cultural teachings as well personal teachings. For example, she tells the story of how the red fox became the first member of the Deer Clan, but it also tells the story of a character who went on an emotionally- and physically-challenging quest.

Along the way, she teaches other Cherokee stories that help add background and depth to the main plot (e.g. why wolf dogs don’t have tails and why deer don’t eat goldenseal). These extra stories not only teach the reader about the cultural significance of different animals or natural occurrences, but it also creates a very well-rounded story that shows off Mayberry’s extensive research.

The more personal lessons that could be learned from this story are those of resilience, bravery, and resourcefulness. Mayberry created a complex yet easily-relatable character who one could easily root for. She was also able to simply intertwine Little Fox’s backstory and childhood into the main plot, which explained the motivations behind most of what Little Fox did throughout the story. Little Fox’s characterization was impressive for the book being only 61 pages long.

The pacing of the story was somewhat fast, making for a slightly confusing read if you aren’t reading it very carefully. Also, in the beginning, it was somewhat hard to tell what was a flashback and what was actually happening, but she sorted that out by the end of the book. Aside from those minor complaints, I thought the book was very well-written and managed to teach a lot of lessons in only 61 pages.

I think this would be a great book for children to read because of its ability to create a vivid world with valuable stories and life lessons to be learned throughout. I really enjoyed reading this and hope other people will read it as well.

Maleaha, an EBCI tribal member from the Yellowhill Community, is a past winner of the Young Native Writers Essay Contest.