Madison Hye Long sees life as art and her camera is her paint. The EBCI tribal member is gaining international attention as a photographer having had her work featured in a recent New York Times article entitled “Native American Photographers Unite to Challenge Inaccurate Narratives”.

The article came about through her recent involvement in an online database called Natives Photograph which includes the work of 26 Native American photographers. “They built the website for us to be recruits for editorials for big magazines,” Long said.

The New York Times article was a launching of sorts for Natives Photograph, but Long says the interest in Native American photographers began at the recent Standing Rock NoDAPL protests.  “Now, everybody is getting very involved in Native American culture and aboriginals in general.  So, they built the site, and I was a lucky one!” 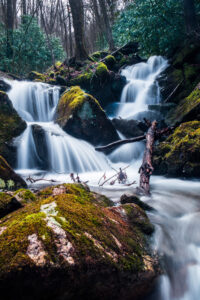 BEAUTY: Madison Hye Long, an EBCI tribal member, is gaining international attention for her beautiful photographs such as this long-exposure shot of water in the mountains. (Photo by Madison Hye Long)

Long said the Travel Channel reached out to her several months ago.  “They’re wanting me to cover western North Carolina.  They got some of my night photos, and they’re going to be featuring an article based in the Appalachian area.”

Having grown up on the Qualla Boundary, aka Cherokee Indian Reservation, Long said she uses her life experiences in her work.  “I take a lot of it with me.  I know where I’m from, and I make sure I always add in some sort of it.  Just the Rez in general is a personality, and I always put that in every bit of my work.  But, I am a lot different than everybody here, that’s for sure, and I think that’s good.  Differentiality is super-good.  I always know who I am and just who I want to be.”

Working hard is a part of her everyday life.  “Staying driven is what you need.”

Next month, she’s moving back to California to continue her education as she is majoring in photography at the Academy of Art University in San Francisco.

“I’m on a fine line between documentary and fine art – always on that fine line,” noted Long.  “Because, when you shoot a Native American or you shoot something cultural, that is like a documentation.  But, I always like to add art in there to make it attractive, make it stand out, and create a narrative.  That’s what I always shoot for is creating narratives that people can get something from instead of just looking at it and saying ‘oh, that’s pretty’.  They think about it.”

For Long, photography should convey a message.  “I hope to make some sort of impact.”

A project she’s currently working on with Dylan Rose, dealing with substance abuse on the reservation, is one she hopes will make a large impact.  “I want to create something so intense to get some awareness because it’s obvious that what we’re doing now is not working.  Art inspires, always.”

Long, who will give the upcoming commencement speech at the Cherokee Middle School 8th grade graduation, believes in dreams.  “If you like something, chase it and don’t let anything stop you.  Always use your resources.”

She said that in order to chase your dreams, you have to go out and get it…sometimes, you have to literally climb a mountain.  “I hike.  To get these pictures, you’ve got to hike and drive, and that’s the best part is just getting out and getting off of your phone, getting off of social media.  Whenever you’re off and away from the media, you find yourself.  You experience more.  You learn more, and you have more fun.”

Long is shooting high for her career.  “I’ve got the Travel Channel, and I’m working with them.  The next stop is NatGeo!”