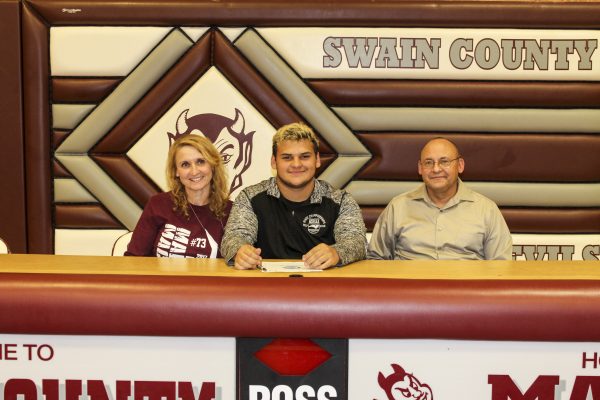 NEXT LEVEL: Will Paul (center), an EBCI tribal member and senior at Swain County High School, signs a letter of intent on the afternoon of Thursday, May 17 to play football this fall at Guilford College. He is shown with his parents, Florence and Bill Paul. (SCOTT MCKIE B.P./One Feather photos)

BRYSON CITY – Will Paul, an EBCI tribal member and senior at Swain County High School, signed a letter of intent on the afternoon of Thursday, May 17 to play football this fall at Guilford College in Greensboro.  He is set to play on the defensive line for the Quakers, a Division III school that competes in the Old Dominion Athletic Conference.

“When I was younger, it was something that I never expected,” said Paul.  “I’ve always tried to stay as modest as possible, and I never saw myself competing at the next level or being able to or being offered to, but it’s just an opportunity that I think I’ll not regret.”

This past football season, Paul had 87 total tackles for the Maroon Devils including a fumble recovery for a touchdown and two blocked kicks.  He was named to the All-Smoky Mountain Conference team as well as the second team of the All-WNC team.  He is a three-year starter for Swain County having played on both the defensive and offensive lines.

Paul said he is looking forward to just playing defense at the next level.  “I’ve always enjoyed defense more.  I enjoyed being the one to hunt instead of the one to protect.  Defense is more fun to me.  You can be more aggressive.  You can use physical advantages more than on offense.”

Also a wrestler, Paul won the 1A state championship at 220lbs.  He finished the season 23-4 overall and was named to both the All-Smoky Mountain Conference team and the All-WNC team.  When asked about his decision to play football in college as opposed to wrestling, he noted, “Wrestling at the next level is intense. I wrestled at the 220lb weight class which is not a weight class in college.  If I wanted to compete well in college, I would have had to have dropped to 197lbs, and I didn’t look forward to that.  And, I thought the state championship, the finals match, was a good way to end my career.”

Neil Blankenship, Swain head football coach, commented, “We wish you the best of luck and congratulations to the parents on that feat.  My favorite time of year is to see how many folks graduate.  It’s a time to celebrate.”

Bill Paul, Will’s father, said, “I’m happy for him.  This is a chance for him to grow up, mature, and actually have fun doing what he’s doing while attaining his goal.  He wants to be a physical therapist in the sports medicine field, and this is one way to get it.  Plus, he misses hitting people, and as a defensive person, he’ll be doing that.  I’m pretty happy for him.”

Will’s mother, Florence, noted, “It’s really exciting.  It’s awesome.  I’m excited for him, and this way I can go watch him play and that’ll be great.” 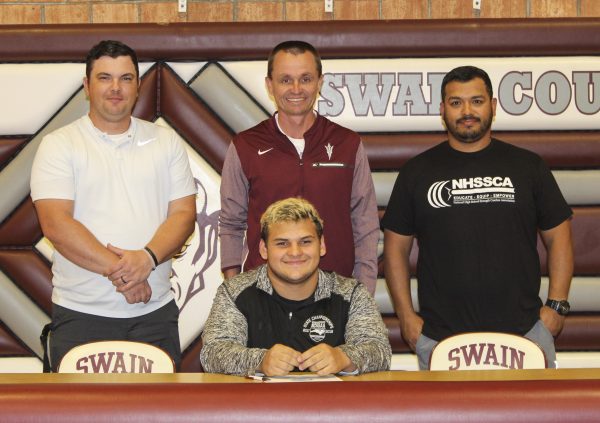 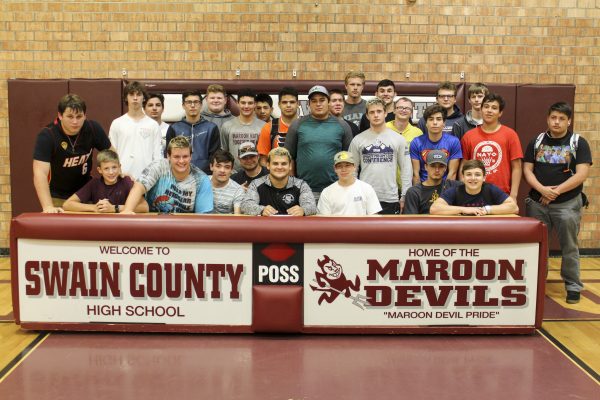