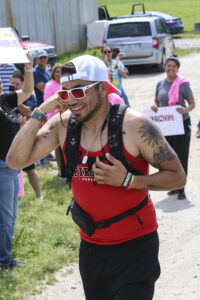 JOURNEY: Kallup McCoy II, an EBCI tribal member and founder of RezHOPE Recovery and Consulting, starts a 1,212 mile run to Oklahoma from Kituwah on the morning of Monday, May 14. He is retracing the Trail of Tears Benge Route. (SCOTT MCKIE B.P./One Feather photos)

KITUWAH – Lau Tzu, 6th century Chinese philosopher, once said, “The journey of a thousand miles begins with one step.”  One EBCI tribal member took that first step on the morning of Monday, May 14 as he embarked on a 1,212 mile run to Tahlequah, Okla.

Kallup McCoy II, founder of RezHOPE Recovery and Consulting, surrounded by nearly 100 friends, family and supporters, left on his journey from the Kituwah Mound as he retraces the Trail of Tears Benge Route.

“I can’t explain the emotions that I’m going through right now,” said McCoy.  “I’m a little nervous.  I’m a little excited.  I’m a little sad.  Just looking back on everything, I never thought that I would be here.  But, life is truly limitless when you put in the hard work and the dedication to something and you’re not afraid to step out of your comfort zone.”

McCoy will be covering a little more than 34 miles per day on his run.  A couple of weeks ago, he ran 120 miles in six days.  “That’s what I’ll be doing out here is running six days a week and resting on Sundays to take care of my spiritual well-being.  It was fairly easy.  On Sunday, I didn’t feel like I had run 120 miles through the six days.  My feet have held up.  I just know the Lord is going to bless me.  I just know that God is going to bless me and honor the things that I’m trying to do.”

Principal Chief Richard G. Sneed commented on McCoy’s journey, “I think it’s a tremendous undertaking, and I think that the fact he is doing this will bring understanding and awareness of how this issue is impacting our community.  My hope is that it will be an impetus for other folks to see that recovery is possible.  There is hope.  Certainly, Kallup has gone through quite a journey already.” 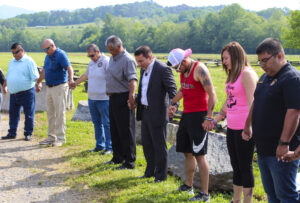 Chief Sneed, an alumnus of the Remember the Removal bike ride to Oklahoma, said that he feels McCoy will come back from his journey even more changed than before.  “I’m just excited for him.  I’m excited for what that means for our community, and I’m just going to be supporting him the whole way.”

Prior to leaving on his run, McCoy and his supporters joined in a large prayer circle.  He told the group, “We lock arms, put aside our differences, unite, and walk along beside each other – this is how we make an impact.  This is how we change our community.”

Warren Dupree, Steve Youngdeer American Legion Post 143, presented McCoy with a beaded hawk feather for his trip.  “For him to run from the Mother Town to Oklahoma is a feat that is just beyond imagination.  With what he has committed to undertake, words cannot describe that.”

He added, “Kallup came to our Post a few months ago to thank us for our service, and we shared with him, at that time, that we, as veterans, suffer everyday – PTSD, substance abuse, a lot of our veterans self-medicate if they’re not on medication.  So, we know what he has been through.  We know what he is suffering because we suffer as well, and we offered our support in everything that he does.”

Dupree called McCoy’s run “inspirational” and said, “That young man, with all of his trials and tribulations, he has suffered, like us all, is my hero for what he is wanting to accomplish.  And, he will accomplish that.”

When asked how many pairs of shoes he is bringing on the trip, McCoy laughed and said, “I’ve only got one, but I’m going to pick some up along the way.  I’ll probably go through three pairs of shoes.”

To view or purchase photos from this event, visit: https://onefeather.smugmug.com/COMMUNITY-and-NEWS-EVENTS/2018-Community-and-News-Events/Kallup-McCoy-sendoff-event-from-Kituwah-Mound-May-14/