Note: This article, which features EBCI tribal member Nelson Lambert, is part of a piece entitled “The Top 50 STEM Workplaces” which listed organizations ‘setting the standard for Native American STEM professionals’ which ran in the April 2018 issue of Winds of Change magazine published by the American Indian Science and Engineering Society (AISES).  It is reprinted by permission from Winds of Change © 2018 by AISES, Publishing, Inc.

Nelson Lambert still remembers the first time he set foot in the Las Vegas offices of BMM Testlabs.  A native of North Carolina, Lambert was in Vegas completing both an LLM (an advanced law certification) in gaming law and regulation at the University of Nevada, Las Vegas, and an externship at the Nevada Gaming Control Board where he was invited to visit BMM’s global headquarters.

“When you walk into their training room you see a custom mural of Native American pow wow dancers,” recalls Lambert.  “I just thought that was so cool.”

That initial positive impression quickly grew, and Lambert is now tribal services manager at BMM Testlabs, the oldest-established private independent gaming testing laboratory in the world.  Lambert works closely with tribes around the nation to ensure that their gaming operations are in compliance with regulations.

“Every jurisdiction in the U.S. requires that an independent testing lab certify gaming devices before they ever hit the casino floor,” he says.  “We make sure those standards are being met.” 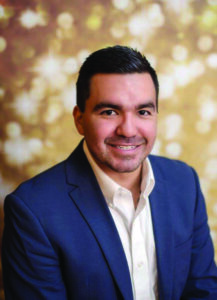 FEATURE: EBCI tribal member Nelson Lambert was featured in a piece entitled “The Top 50 STEM Workplaces” which listed organizations ‘setting the standard for Native American STEM professionals’ and in the April 2018 issue of Winds of Change magazine published by the American Indian Science and Engineering Society (AISES).  (Photo courtesy of BMM Testlabs)

That Lambert is charting a career in the gaming industry is not surprising.  For over two decades his father, a lawyer, was the executive director of the Cherokee Tribal Gaming Commission for the Eastern Band of Cherokee Indians.

“I grew up knowing gaming in a sense just from seeking what he had to do and going to conferences with him and seeing how he used his law degree,” Lambert says.

But, Lambert didn’t initially follow in his father’s footsteps.  He earned an undergraduate degree in English literature at the University of Tennessee, Knoxville.  After college, he made his way back home to Cherokee, NC and started working at Harrah’s Cherokee Casino Resort.

“I was a Cherokee leader at the casino, and that’s a fast track for management because our Tribe pushes for having our own people run our operation,” he says.  The experience gave him an expansive view of how casinos operate, as Lambert did everything from helping train blackjack dealers to working with technical staff responsible for the gaming software.

Though he had a promising career well in motion, Lambert also knew that if he got too comfortable he would never fulfill his ambition of going to law school.  So, in 2013, he left Harrah’s to attend the Charlotte School of Law in North Carolina, where he secured his JD, and eventually landed in Las Vegas for more specialized training.

Before and after attending law school, Lambert had a clear career goal.  “I’ve always known that whatever job I take it will have to benefit Indian tribes in some way,” he says.  “That’s why I went to law school.”

Lambert feels as though he’s accomplishing this in his career with BMM.  In part, that’s because his work helps tribal gaming operations succeed for the benefit of Native people.  “We work alongside tribal gaming regulators and operators, providing them with the educational and software verification tools needed to stay in compliance with their jurisdictional standards,” he explains.  “Ultimately, this helps ensure the security of the gaming assets and that the proceeds, which help fund many tribal services for the people, continue flowing back into the community.”

For Lambert, that service to tribal communities also includes the commitment BMM has made to cultivating and hiring Native students, particularly those with STEM degrees.  BMM and Lambert rely on STEM graduates who can test and analyze the integrity of gaming software to ensure compliance.  “BMM has a dedication and commitment to Indian tribes, and we know the future is STEM,” he says.  “We have to have those new, fresh eyes coming on board to stay innovative.”

BMM is a longtime supporter of the AISES Scholarship Fun.  And this year, the company took that commitment to Native STEM students even further by establishing an internship in partnership with AISES.  The 10-week paid internship in Las Vegas offers an opportunity to help BMM engineers assess gaming technology integrity, review gaming device and system source code, and even assist with the development of testing procedures.  It’s a way to provide students with hands-on experience while also delivering valuable exposure to potential careers in gaming.

Lambert is eager for other Native Americans to join him at BMM, not only because he knows they’ll make important contribution but also because it will help motivate others to pursue STEM education and careers.  “This has a ripple effect,” he says.  “Where I come from, we know that it’s empowering to our young people to show the success of other Native people.”