TEAM: The Cherokee Braves varsity football team, shown at a ceremony on Friday, May 4 where they received their 2017 1A State Championship rings, won the Skyland Automotive Group Division II Male Team of the Year award at the WNC Sports Awards held at the Grove Park Inn in Asheville on Sunday, May 6. (SCOTT MCKIE B.P./One Feather photos)

ASHEVILLE – The entire Cherokee Braves 2017 state championship football team and Tye Mintz, Braves senior, were honored at the 57th WNC Sports Awards held at the Grove Park Inn on the evening of Sunday, May 6.  The Braves, who received their state championship rings two nights earlier, received the Skyland Automotive Group Division II Male Team of the Year award and Mintz won the Merrill Lynch/Keller Ferrell Division II Male Athlete of the Year award for his efforts in football and basketball. 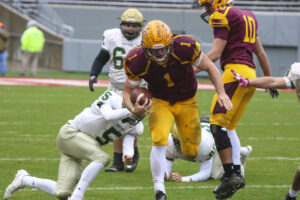 LEADER: Cherokee’s Tye Mintz, senior, shown running during the 1A State Championship game at Carter-Finley Stadium on Dec. 9, 2017, has been named the Merrill Lynch/Keller Ferrell Division II Male Athlete of the Year.

“I feel very proud for our young men for all of the hard work they’ve put in and the accomplishments they had this year,” said Kent Briggs, Braves head football coach.  “It was great to be recognized by western North Carolina as the top team in the area.”

Mintz, who received a large trophy and a $1,500 scholarship on the night, told the One Feather, “Winning that scholarship meant so much to me.  Out of all the players they could have picked, I was one of them.  There really isn’t a way to describe how I’m feeling.  I just want to thank everyone who never gave up on me and pushed me to be the best me there is.  I want to give a special shout out to Jama Anders on pushing me through everything.  Every time I wanted to give up, he was there making me strive for the best me.  I truly feel blessed to have so many people back me.  Thank you everyone!”

Shelby Wolfe, a senior member of the Lady Braves basketball team, was nominated for the Blue Ridge X-Ray Female Student Athlete Academic Award which was won by Anna Newman, Roberson swimming and diving.

Peanut Crowe, Cherokee Central Schools athletic director, commented on Cherokee’s awards and nominations, “This is another example of how hard work pays off for our student-athletes at Cherokee High School.  I couldn’t be prouder of a group of kids.”

Other Smoky Mountain Conference winners on the night included: