UNITY: The Cherokee Braves 2017 varsity football team was honored with their state championship rings on the evening of Friday, May 4 at Ray Kinsland Stadium. (SCOTT MCKIE B.P./One Feather photos)

One-hundred and forty-six days after the Cherokee Braves endured the rain, sleet, and snow in Carter-Finley Stadium in Raleigh to best the North Duplin Rebels in the 1A State Championship game, the players received their prize.  Braves fan packed Ray Kinsland Stadium on the evening of Friday, May 4 to witness their state champions honored with their rings.

“It just feels so good for these guys to go out there and work so hard to gain something really, really big, and these rings are a really great symbol of what we’ve accomplished,” Kent Briggs, Braves head football coach and honorary member of the Eastern Band of Cherokee Indians, said following the ring ceremony.  “But, the real treasure is our memories that we will have of the journey.  I’m so happy for these guys that they can take this for the rest of their lives.  When they go through tough times, they can remember the times when they persevered and got back to where they wanted to be.  I’m just so thankful to be a part of it.” 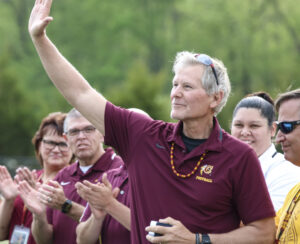 COACH: As Shawn Crowe, emcee for Friday’s event, put it, “The man who steered the ship”…Kent Briggs, Braves head coach, waves to the fans.

Tye Mintz, Braves senior quarterback who has signed to play football next season at Kennesaw State University, commented after receiving his ring, “I think it’s finally hitting me that I won’t be playing football here anymore. It’s a sad day, but it’s also a great day.  We made history so we’re always be remembered here.  It feels good to finally get our accomplishments.”

Holden Straughan, Braves senior wide receiver and defensive back who will continue his football career this fall at Lenoir-Rhyne University, commented, “It feels real now.  Before, it didn’t feel as real.”

He said the team has cemented its place in Cherokee Braves football history.  “It is the greatest team because we were the first to win state.  It is a great feeling to know that I was a part of it.”

Prior to the team and coaches receiving their rings, the Braves varsity cheerleaders were each honored with a necklace and pendant.

Principal Chief Richard G. Sneed spoke during the event, “Thanks to everyone for being here.  You’re a testament to Braves pride.  We’ve got the best fans probably anywhere in the southeast.  I want to say thank you to the players.  You gave us hope.  You gave us something to cheer for this season.  Thank you to the coaches, the training staff, and one group that I think gets forgotten a lot – the parents of these young men and the parents of the cheerleaders here with all the hours of travel and expense that they put in supporting these players.” 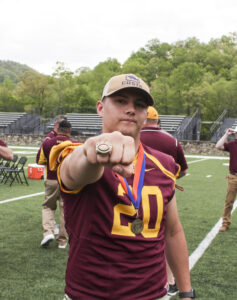 Commenting on the state championship game, he said, “There was such a surge of pride when it was obvious the game was going our way.  It was amazing driving down there and seeing all the cars with Cherokee ‘C’ on it and flags and banners.  I just want to say we’ve got the greatest fans anywhere.”

Shawn Crowe, a member of the 1978 Braves team that was state runner-up, emceed Friday’s event.  He spoke of this team’s dedication in the pre-season leading up to the 2017 championship campaign.  “They were in the weight room all summer, playing 7-on-7s, practice, games started in August and as Coach Briggs and I were talking today he said something that rang true.  ‘Yeah, we worked hard, but people don’t understand what it takes to come together as a team to get this far.’” 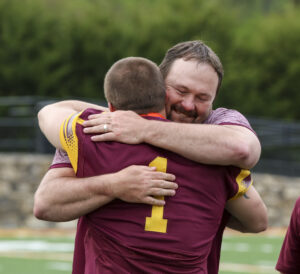 Crowe said this year’s team faced and overcame adversity like champions.  Speaking of the team’s one blemish on the season, a 35-12 loss to Murphy in the last game of the regular season, he noted, “It is a true testament to this team that they overcame.  They overcame the talk.  They overcame the inner turmoil that sometimes kills a team…when you’re on top of a mountain and looking out, everything is good.  It’s down in the valley and it’s at its worst, that’s when it really truly tests you of who you are as a team.”

He added, “These guys came back as a team, as brothers.  It’s easy to be a football player.  It’s hard to be a warrior.”

Following is a recap of the Braves 2017 season:

To view or purchase photos from this event, visit: https://onefeather.smugmug.com/SPORTS/FOOTBALL/BRAVES-FOOTBALL-2017/State-Championship-Ring-Ceremony-event-May-4/ 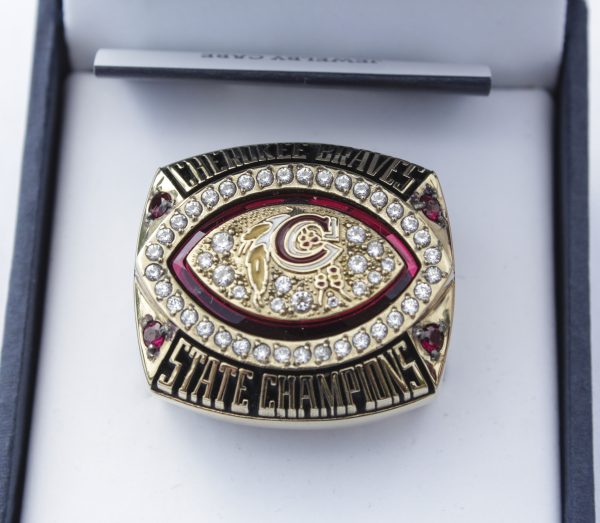