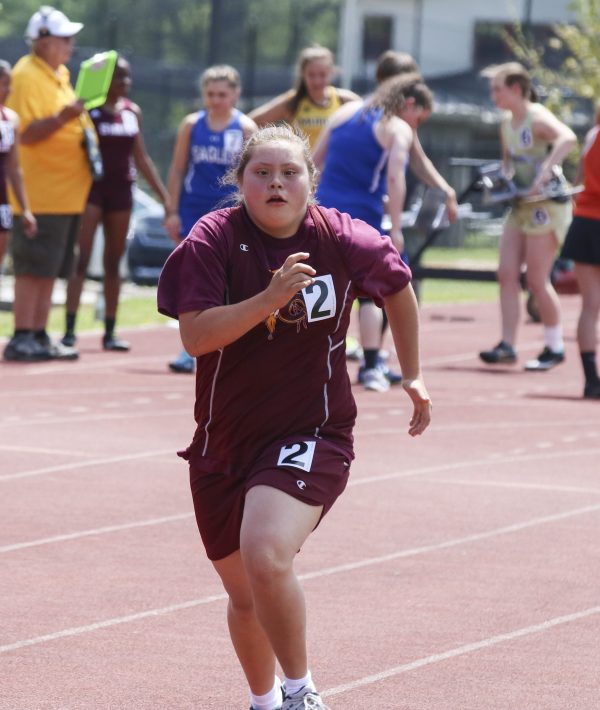 “She catches the pass from the wing… she shoots… and she scores! Jacee Smith for THREE!” As the announcer shouts, the crowd goes wild cheering loudly for #25! Smith has been named the SONC (Special Olympics North Carolina) May Athlete of the Month.

“The whole Tribe has really rallied around Jacee,” says her father, Tim. “Everyone comes together to cheer for her and everyone loves her. She doesn’t meet a stranger.”

This love Smith’s community has for her started before she was even born.

“When we first found out that she had Down Syndrome, her pediatrician, Dr. Arkansas, really helped us,” shares her father. “Then other families in Qualla Boundary started reaching out when they found out Jacee had Down Syndrome and they have all helped so much.”

After watching a student with Down Syndrome graduate with Honors when Smith was just five months old, the entire family was inspired to always encourage her to do her absolute best.

ELECTRIC: Smith (#25) goes for a shot in the second half of a game against Andrews at the Charles George Memorial Arena on Feb. 6. She electrified the crowd with 11 points including three from three-point land.

Since then, the family has kept Smith in regular education classrooms, has put her on teams where she is an active participant and has ensured that everyone around her treats her no differently than anyone else.

The family ensured that Smith never felt different than the rest of her peers and because of that, Smith emerged as a leader in the Special Olympics Qualla Boundary program.

A star on the basketball court, Smith models herself after her role models: her older brother and sister, Ray and Kayla, Steph Curry and Kevin Durant.

Smith’s determination on the court has received recognition beyond the Tribe. Recently, WLOS News 13 recognized Smith as their GameChanger of the week!  “That was a huge honor,” says her father. “She was so excited to be on TV and she scored 11 points when they had the cameras there!”

But Smith’s involvement in her community extends beyond basketball. A regular participant in the Far West Spring Games, Smith is always encouraging her fellow athletes to join her in that competition.

“I am so excited to compete in the Spring Games this year,” says Smith.

She’s an inspiration to all in the community and her family hopes Smith’s stories will continue providing hope to everyone.

“We just hope that the way we raised Jacee can open doors for other athletes in the tribe – we want them to be just as included and accepted and loved as she is,” shares her father. “Jacee wants the athletes in Special Olympics to know that they are their own person and that they can rule the world.”