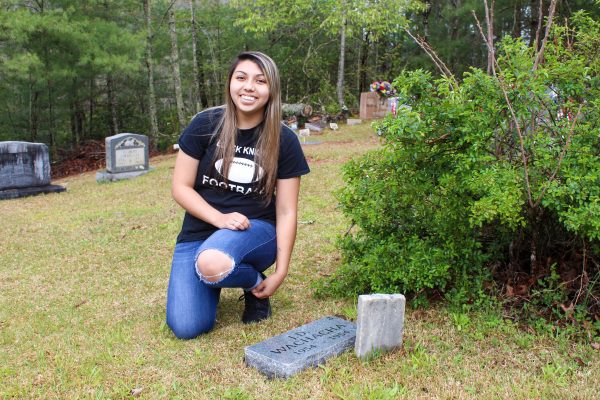 HISTORY: Ryen Bird, an EBCI tribal member from the Snowbird Community and a junior at Robbinsville High School, is shown in the Buffalo Independent Baptist Church cemetery on the morning of Wednesday, April 25. As part of her high school senior project, she has been researching and marking gravesites in the community such as the one in front of her for J.D. Wachacha, her great uncle. The new marker is directly in front of Bird, and the original marker, without words, is shown to the right. (SCOTT MCKIE B.P./One Feather)

“My dad (Jonah Bird) is a part of the Gadugi Free Labor Group for Snowbird, and he’s been digging graves since before I was born,” said Bird who chose this endeavor as her senior high school project.  “When I would go with him sometimes, I noticed that there are a lot of people in these graveyards that don’t have headstones.  And, there are a lot that you can’t even identify at all, and I thought that my senior project needed to be something that actually meant something.  So, I decided to do research and then mark all of those.”

So far, Bird has visited 18 cemeteries in the area.  “I have over 80 graves that I can identify and mark, but then there’s that many more that I still haven’t been able to figure out.”

She has held several fundraisers to get the money to purchase headstones for those graves, and she was able to install 20 in the Buffalo Independent Baptist Church on Saturday, April 21 with the help of her father, several aunts and uncles, and her mentor, Tribal Council Chairman Adam Wachacha.  She has seven more to install at that site.

“I’m just so proud of her,” said Brenda Norville, Robbinsville High School Native American advisor.  “With this project, she went above and beyond.  This project really reached the entire community.  It affects all of our families.”

Researching the gravesites has been beneficial for Bird from both an educational and a cultural standpoint.  “Some of them are in the syllabary.  So, I go to people in the community and ask them.  If they don’t know, then I go to ancestry and genealogy.  My mom (Emily) has helped me a lot with the research.”

Bird plans to do more fundraisers and order more headstones in June.  When asked if her project was nearing completion, she laughed and noted, “Not even close…”