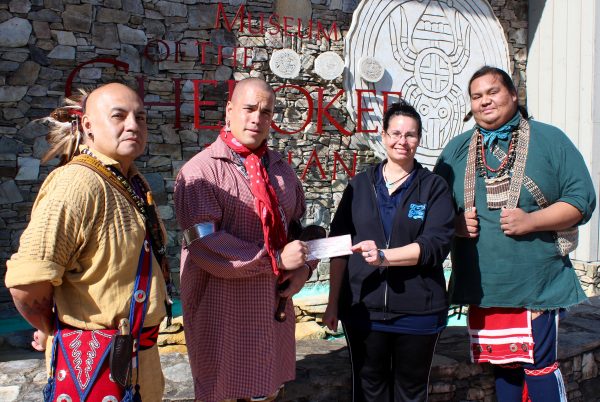 DONATION: Several members of the Warriors of Anikituhwa pose with a $500 donation from the Steve Youngdeer American Legion Post 143 which will be used to help fund their trip later this year to London, England. Shown (left-right) are – Sonny Ledford; Mike Crowe Jr.; Dawn Arneach, Museum of the Cherokee Indian executive assistant; and Jarrett Wildcatt. (SCOTT MCKIE B.P./One Feather)

Later this year, members of the Warriors of Anikituhwa will travel to London, England as ambassadors of the Eastern Band of Cherokee Indians, and efforts to raise funds for their trip are going well.  The trip will total around $30,000 for the group, and so far around $3,000 has been raised.

The group has accepted an invitation to participate in the prestigious London New Year’s Day Parade on Jan. 1, 2019, and prior to that event, they will visit various historical sites and have several appearances.

Seven members of the Warriors of Anikituhwa will make the trip, which will last from Dec. 27, 2018 to Jan. 3, 2019, including: James “Bo” Taylor, John “Bullet” Standingdeer, Daniel Tramper, Sonny Ledford, Mike Crowe Jr., Jarrett Wildcatt, and Will Tushka.  Several Cherokee women are slated to go as well such as: Tyra Maney, Kristy Maney Herron, Stephanie Maney, Dawn Arneach, and Delanna Studi.  Charlie Rhodarmer, Sequoyah Birthplace Museum executive director, will portray Lt. Timberlake during the parade, and Ethan Clapsaddle, Museum of the Cherokee Indian program director, will represent the Museum on the trip.

By making the trip, they embark on a journey which will mark only the second time in the past 255 years that an official Cherokee delegation has visited England.  Ostenaco, Pigeon (reported in some instances as ‘Pouting Pigeon’), and Stalking Turkey visited England in 1762, escorted by Lt. Henry Timberlake, where they met with King George III and drew huge crowds during their stay.  A Cherokee Nation delegation, led by Cherokee Nation Tribal Councilor Jack Baker, visited in June 2012.

Ledford said cultural awareness is a major part of the trip as well as a major part of what himself and other members of the group do every day.  “There’s not that many people who do what we do culturally, but I encourage more people to do it.  To go to London and represent all of our people, not just the Eastern Band, will give us a chance to represent and educate at the same time.  I know we’re going to get a thousand questions when we get there.”

Ledford said the group is working on several fundraisers, including an upcoming raffle, which will feature Cherokee crafts, some of which will be made by group members and some of which will be items the Warriors possess.  He noted he is planning to donate a set of Indian ballsticks, made by the late EBCI Beloved Man Jerry Wolfe, which is “near and dear” to him.

Ledford said the London trip will be historic.  “I think about it a lot – being a representative is a big responsibility.  We do it every day, but this is a lot more.”

Crowe noted the group is remaining vigilent in their fundraising efforts.  “We’re talking about a lot of ideas, and we’re looking forward to getting some of those off the group in the coming days ahead.  Maybe the culminating event will be at the Cherokee July 4th Pow Wow where we will have some drawings for our raffles.”

The idea for the trip came about quite simply.  Dawn Arneach, Museum of the Cherokee Indian executive assistant, was watching this year’s London New Year’s Day Parade on television with family and discussion ensued about the possibility of Cherokee people attending as a group.  She contacted Parade officials and made an official request to be looked at a group.

In February, she received a letter from Robert Bone, London New Year’s Day Parade Festival executive director, inviting the group to the Parade.  Bone wrote, “The event is supported by The Lord Lieutenant of Greater London, and his Deputies representing the Queen.  The event boasts a list of active patrons and supporters including The Lord Mayor of the City of Winchester, The Mayor of London, The Prime Minister, and The Minister of Culture of Great Britain.  The New Year’s Day Parade is the largest event of its kind in the world with a street audience counted in hundreds of millions.”

Arneach related that a representative from the Parade will visit Cherokee later this spring to present the group with their official invitation.