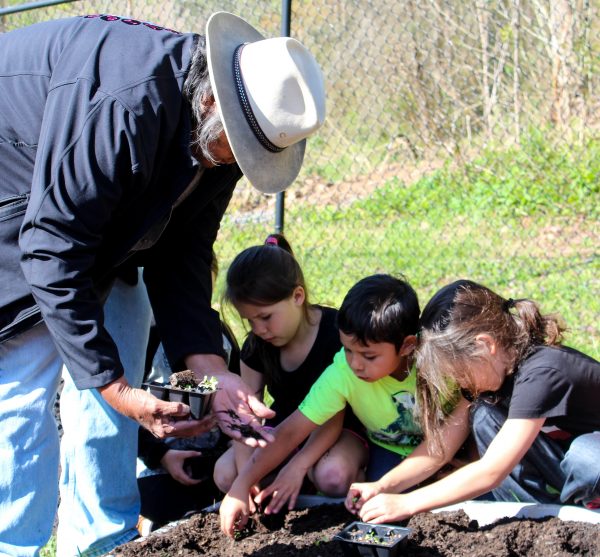 The Cherokee tradition of raising food is being passed down to the younger generation at the New Kituwah Academy.  Students planted kale, mustard greens, creasy greens, and onions in two raised garden beds at the school on the morning of Wednesday, April 18.

“What you are doing here today is the first step, a much-needed step, for our youth to engage in growing your own food,” Joey Owle, EBCI Secretary of Agriculture and Natural Resources, told the students.  “Part of what we’re seeing right now is that there is a large gap between our younger generation and our older generation on growing food and knowing where your food comes from.  We are very happy to support this project.  The bed materials were donated from Cooperative Extension.”

During the event on Wednesday, first-language Cherokee speakers joined the students and helped guide them through some of the soil preparation and planting.  “This provides a perfect venue for speakers to speak to our young people in a very relatable manner,” said Owle.  “They’re talking about what can be planted today, names of crops, irrigation strategies, and seeds.”

He added, “As you start to grow your own food here, go home and encourage your parents, your aunts, your uncles, your grandparents to do their own raised beds in their own front yard…this entire valley used to be beans and corn and squash.  You young folks are embarking on something I wish I had when I was younger.” 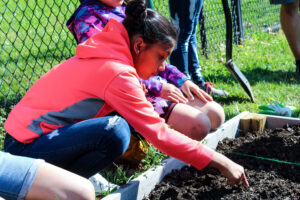 Kylie Crowe Shuler, New Kituwah Academy principal, commented, “I think it’s a good chance for the kids to get to use their Cherokee language outdoors and not just in the classroom setting.  They get to talk about planting, weeding, cooking the plants, and collecting and gathering.  I think it is important for them to interact with the speakers so they get that language aspect.”

The project was spearheaded by Jessica Metz-Bugg, New Kituwah Academy science teacher.  “This is the very beginning of this project,” she told the students at the beginning of the event.  “We have lots more gardens to come.”

Metz-Bugg noted that corn and beans will be planted in a garden area in front of the school later this spring.  “Food and planting is such a huge part of Cherokee culture.”

The students participated in all facets of the planting on Wednesday from preparing the soil and digging the planting holes to planting and watering the seeds.

“I learned that for the baby seeds instead of putting two in a hole, you can just scatter it all over,” said Suli Lossiah, New Kituwah Academy fifth grader, who related that she has previously learned some about gardening from her grandfather.  “That makes life easy.”

When asked what she likes about gardening, Lossiah noted, “I like getting the shovel and dirt and throwing it all on there.  I like getting dirty!”

Addyson Welch, New Kituwah Academy fifth grader, commented, “I learned that some rocks can scrape you up, and I also learned that it makes it easier to just go across all the dirt to spread it instead of just going one circle by one.”

She added, “My favorite part is playing with the dirt.”