Three students at Cherokee High School have been accepted to one of the most prestigious performing arts schools in the country.  Eason Esquivel, a senior, and juniors Jake Sneed and Marianna Hornbuckle have been accepted to study at the American Musical and Dramatic Academy (AMDA) with campuses in New York City and Los Angeles.

“I always knew I wanted to do something with the arts,” said Sneed who will start in the fall of 2019 after graduating from Cherokee High School.  “I’ve toured a lot of art schools.  When we went to AMDA, something just clicked there that I’ve never felt at any of the other schools I’ve visited.  I really feel that is where I’m going to belong and that’s where I am going to do the best.”

He added, “It’s just a really crazy, hectic experience, and I love it all.  It’s amazing.” 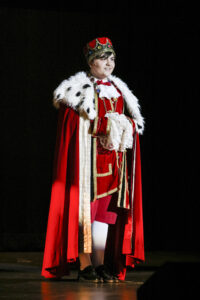 KING: Jake Sneed, a junior at Cherokee High School, shown performing a number from the musical “Hamilton” at the Short Attention Span Theater program on Nov. 30, 2017, has been accepted to the American Musical and Dramatic Academy (AMDA). (SCOTT MCKIE B.P./One Feather photos)

All three students will study in the Integrated Musical Theater Program.  They each had to audition to be accepted into the school.

“It’s a mixture of excitement, a little bit of fear, and bewilderment,” said Esquivel who will start this fall. “I still can’t believe it.  In elementary school, middle school, and the early part of high school, I didn’t want anything to do with performance.”

This is quite the departure from his initial thoughts on a career path which involved enlisting in the military.  But then, one of his friends encouraged him to audition for school’s first-ever musical, “Lion King Jr.”, in 2016.

He auditioned, made the show, was cast as Timon, and the rest is history.  “The next thing I know, Mr. Yannette is pulling me into the Chamber Singers, chorus, and musical theater, and I was thinking, ‘wow, this is really fun.’” 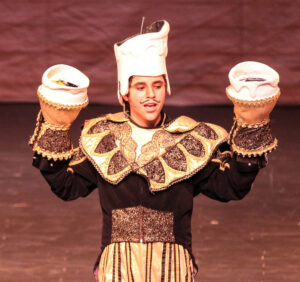 LIGHT: Eason Esquivel, a senior at Cherokee High School, shown performing in the part of Lumiere during opening night of last spring’s production of “Beauty and the Beast” on April 27, 2017, has been accepted to the American Musical and Dramatic Academy (AMDA).

Esquivel said he really began to think of musical theater as a career.  “I never thought I’d be able to take that step.  I didn’t know where to start.”

Hornbuckle, a junior who will start at AMDA in the fall of 2019, noted, “Getting accepted into the program was an overwhelming type of joy.  Ever since I was a little girl, I always knew that I wanted to be a singer.  I always wanted to do something in singing, but I never really knew where to start.”

What she describes as “terrifying stage fright” almost derailed her dreams.  “I would never get up on stage.”

She remembers Michael Yannette, Cherokee High School and Cherokee Middle School director of choir and musical theater, giving her inspiration prior to a performance several years ago.  “He told me, ‘how are you going to be able to do what you love unless you step out of your comfort zone to make it happen?’  I cried for a minute because I was scared, but I took a deep breath and we went on stage and being under the light and being the center of attention was probably one of the greatest things that I’ve ever experienced.” 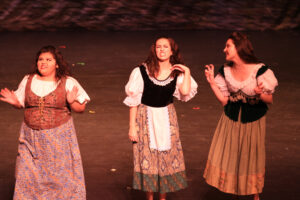 MUSICAL: Marianna Hornbuckle (left), a junior at Cherokee High School, shown performing during opening night of last spring’s production of “Beauty and the Beast” on April 27, 2017, has been accepted to the American Musical and Dramatic Academy (AMDA).

Chryssie Whitehead Disbrow, Cherokee High School and Cherokee Middle School dance instructor, is an alumni and faculty member of AMDA.  “I did not secure their spots.  They all had to come in prepared, and they came in very well prepared for the audition.  They had to sing.  They had to act.  They had a coaching session with one of the teachers there.”

She added, “For me, I feel hopeful for them as people.  I think the performing arts and musical theater is not just all glitz and glamour.  It teaches you compassion and empathy, and I’m excited for them to experience their life after 18 and what it all has to offer.”

Yannette commented, “You ultimately want to feel like you’re preparing them to be able to take this step.”

He said the program at Cherokee High School has been building upon the successes of the previous year to get to this point.  “We’re beyond all of those doubt points anymore.  Really what all of this is for, not just to have those experiences, but those kids know that they are going to go to the next step and be ok.”

Disbrow said, “It’s a possibility that’s out there.  It’s not just glitz or glamour or people thinking ‘oh, I want to be famous.’  I’m really trying hard not to instill that because our business is up and down and up and down and all around, but it’s worth it when you’ve done the work and you know how to do your craft.  To be really good at it, it’s a craft.  You can have your talent, and we have talent, but we’re starting to get that craft going, and they’re going to take that and move it to the next level.”