Cherokee musical theater to present “Shrek: The Musical” and more in May 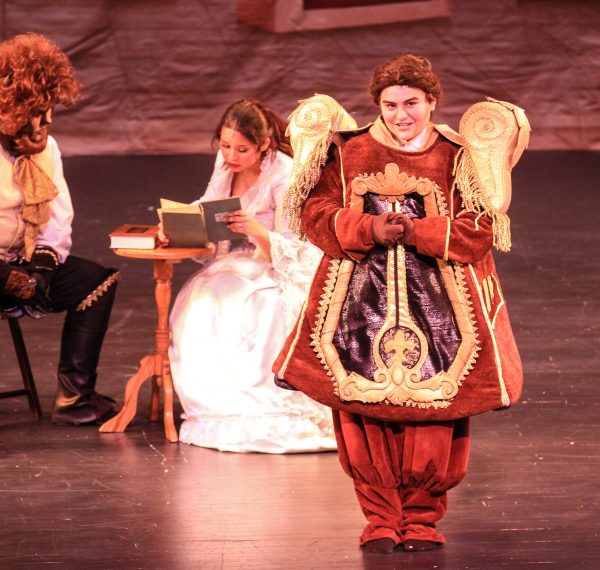 BE OUR GUEST: Jake Sneed, a junior at Cherokee High School, plays Cogsworth in the school’s production of the musical “Beauty and the Beast” last spring. The school will produce “Shrek: The Musical” on May 10-13 in the Chief Joyce Dugan Cultural Arts Program. (SCOTT MCKIE B.P./One Feather)

The Cherokee High School musical theater and choral programs have four events set in May including the school’s third-ever musical and first-ever senior recitals.  All of the events will be held in the Chief Joyce Dugan Cultural Arts Center.

A free piano recital will be held on Wednesday, May 23 at 1:30pm.  The following night, Thursday, May 24 at 7pm, will be a show entitled “Miscast” which will feature students performing songs that they would not normally, or never, be cast to sing.

The following week, on Tuesday, May 29 at 7pm, will be a senior recital featuring performances by Eason Esquivel, Brennen Foerst, Chance Bryant, and a film by Matthew Climbingbear.

All shows will be $5 per person with the exception of the piano recital which is free.

Michael Yannette, Cherokee High School and Cherokee Middle School director of choir and musical theater, is excited about all that the program is doing this spring.  “Shrek just fits our kids perfectly.  We just had all the right people to play all of those parts.”

He said the first time he saw the musical, he enjoyed it, but added, “Now, I have huge respect for it.  It is a hilarious show.  It’s brilliant and the music is fantastic.  I’ve just grown to really love it mostly because the kids are nailing it, but also Chryssie Whitehead (Disbrow), the director, has really found things in it.”

Yannette said the students, himself, and Disbrow have concentrated on character development.  “One of the things that they did really differently this year was they spent a lot of time on table work where they are taking apart the script, and that made a difference.  The kids really invested a lot of thought into their character in a really deep way.”

In their third year of producing a musical, he said one thing is missing.  “There is no more fear.  They’re fearless.  They’re diving in 100 percent completely.”

The musical itself follows the storyline of the first “Shrek” movie pretty closely said Yannette.

Jake Sneed, a junior, is playing Lord Farquaad in the production.  “It’s a very interesting character to play, and it’s a lot different than some of the other stuff I’m used to playing.”

He previously played the role of young Simba in the school’s 2016 production of “Lion King Jr.” and Cogsworth in last year’s production of “Beauty and the Beast”.  “I feel like I get to take a lot more creative liberties with this role than with some of the others.  He’s a very diverse character in the way he handles things…it is fun getting to create and build on how I see the character and building off how others have played the character.”

Eason Esquivel, a senior, is playing the part of Donkey.  “It’s amazing.  I love playing Donkey.”

He played Timon in “Lion King Jr.” and Lumiere in “Beauty and the Beast”.  “Playing Donkey hits a little closer to home.  Lumiere’s flirtatious aspect is similar to my flirtatious aspect, and Timon’s ‘try to ignore the problem and it’ll go away’ aspect is close to mine, but all around I can relate to Donkey.”

Esquivel added, “When I was younger, I didn’t have a lot of friends.  And, it wasn’t until I made that one friend and because of that one friend, I made more friends that I became more of a more social person.  Donkey is sort of the same way.  He talks all the time and he can be annoying, but he’s fun and  is a loyal friend.  But, he doesn’t have friends until he makes friends with Shrek and because of that he makes more friends.”

Marianna Hornbuckle, a junior, is playing several roles including Humpty Dumpty, one of the Three Blind Mice, and is a member of the ensemble.  “It’s been fun working with everybody else in the ensemble and learning all of the new dances.  One of my favorite parts would be the tap dancing…I didn’t know how to tap dance at the start of the semester, but after lots and lots of practice, I have grown a special love for it.”

Chryssie Whitehead Disbrow, Cherokee High School and Cherokee Middle School dance instructor, is the director of the show and choreographer for the dance scenes.

The students have taken well to her instruction and the added dimension of dance for this year’s show.  “It is great to get that level of professionalism, and along the way, she’s teaching us,” said Esquivel. “She’s not only helping us have an awesome show, but she’s teaching us little techniques along the way that I didn’t know before.  I’m growing more as an actor and as a performer, as a singer and a dancer, and she’s prepared me for life after high school.”

Sneed added, “For the show, with Mrs. D (Disbrow) taking on the acting and directing side of it really lets Mr. Yannette fly with perfecting the music and just nailing that all down while she allows us to further deepen, not just perfecting the scene, but creating a sense of these are acting skills and this is how you can apply them to the script…it’s really a team effort between the two of them.”

Yannette commented on Disbrow, “Watching her direct is a constant stream of brilliance and pulling and pulling and actively pulling more out of the kids, but then turning around and reflecting on it saying ‘this is why we’re doing this’.  It’s not just working towards the show.  It’s working on developing them.”

That collaboration is working.

“Actually seeing Mrs. Disbrow and Mr. Yannette work together and see them bring out the best in each other really inspired me to come out of my comfort zone in the past,” said Hornbuckle.  “She helps me learn how to be more forward and bolder which each character I do play.”

Disbrow commented, “I’ve been watching these kids grow from January and come out of their shell and explore and create, they just keep get growing and getting better, and that’s what I care about the most is that they just start to follow their hearts.”

On the one-night show entitled “Miscast”, Yannette noted, “I think every actor has a dream of a song that they love that they know they’d never be cast in that role.  That’s the foundation of that.”

He said it is also a chance to be outrageous.  “It’s a call to do something completely outside of the box and ridiculous.”

For example, Esquivel and Sneed are doing a medley of songs from the Broadway musical “Wicked” as Galinda and Elphaba.  “The whole show is that,” said Yannette.  “Bold choices, weird choices, funny choices, cross-dressing, young kids playing old people…”

Yannette thanked the Cherokee community for their support of the musical theater program and the choral program including the Cherokee Chamber Singers who recently performed at Carnegie Hall.  “The community has been incredible.  None of this would be possible without their support, and we appreciate it so much.”