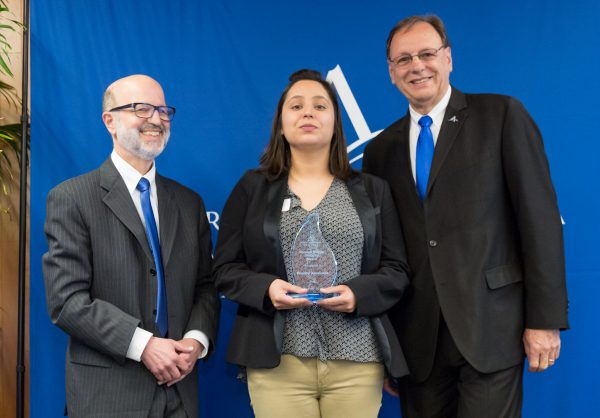 UNC Asheville presented its annual student and faculty leadership awards at a special ceremony on campus on Tuesday, April 10. Brantly Junaluska, an EBCI tribal member, was awarded the Carolyn Briggs Diversity Award for her service as president of the Native American Student Association and work to engage the campus community in a variety of activities to educate and foster awareness of indigenous issues.

“You learn a lot of things in college besides the subject matter of your courses,” said Interim Chancellor Joe Urgo at the awards ceremony. Those lessons include “developing an attitude towards the problems and challenges that we face as a society—that attitude is that if you see something that needs to be done, you’ll step up and do that. We celebrate leaders who do that on campus this year, but all of us in this room can be inspired by the example that they set, because there will be a time when all of us will be asked to step up to do something.”

The university’s two most prestigious student service awards went to graduating seniors Tim Hussey and Olivia Godfrey. Faculty members Jessica Pisano and Keya Maitra also were honored, as were many other students and staff members.

Olivia Godfrey received the William and Ida Friday Award honoring outstanding service to the community. During her college career, Godfrey has served as a student intern for the Land of Sky Regional Council, Area Agency on Aging; as a service-learning student for UNC Asheville Health and Wellness Promotion/Asheville Buncombe Institute of Parity Achievement (ABIPA); as a service-learning student in the UNC Asheville Healthy Aging Program Initiative (HAPI) Lab; and in the HAPI Lab’s Wellness Activities for Seniors in Asheville program. Godfrey is also a member of the American Association of University Women, an American Red Cross Water Safety Instructor, and certified in First Aid for Professional Rescuers. She has worked as a BACCHUS (Boosting Alcohol Consciousness Concerning the Health of University Students) peer educator with the Student Affairs Administrators in Higher Education, and served as a student member of the UNC Asheville Undergraduate Research Program Advisory Council.

Tim Hussey received the A.C. Reynolds Award and Thomas D. Reynolds Prize for his service to the campus. Hussey serves as the president of the Student Government Association, where he tirelessly advocates for students. He is also the programming supervisor for student organizations on campus, a supervisor at the Student Call Center, a member of the Black Student Association, a resident assistant, and a peer mentor for the Connections Peer Mentoring Program. He has participated in national associations including as an Association of College Unions International I-LEAD Program Fellow, and in the National Association of Student Personnel Administrators Undergraduate Fellow Program. He has also served on a number of university committees, including the transportation committee, the tuition and fees committee, the diversity action committee, and the honorary degree committee.

Jessica Pisano, lecturer in English and associate writing program director, was given the Community Connector Award for strengthening bonds between campus and community.

Keya Maitra, chair and professor of philosophy, received the Champion for Students Award.

The following students and staff also were honored:

Daniel Suber received the Newman Civic Fellows Award for his work as a leader in the Word on the Street program, which produces an online teen magazine for arts, culture and expression. With the Center for Diversity Education, Suber works to build pathways for youth of color to environmental careers, and is currently developing a Multicultural College and Business Conference for students to address the racial achievement gap.

Kayla Taylor received the Adelaide Daniels Key Center Community-Engaged Learning Award for her work as a senator in the Student Government Association and as director of community engagement for the Student Organization Council, and as a resident assistant for the social justice-focused learning living community on campus. She is also a fellow of the Ignite NC program, and a tutor in the AVID program.

The student employee of the year was Liz Torres, who has worked at Highsmith Student Union for the past four years in a variety of roles.

Student Organization of the Year was awarded to the College Republicans, for their engagement with campus through respectful discourse and enthusiasm. The group completed a charity fundraiser for a community member in need, and has organized numerous campus events and lectures.

Collaboration of the Year was awarded to student Maggie Clerkin, who worked with multiple entities across campus, including the Student Government Association, the Student Environmental Center, Residential Education, and the AVID tutoring program.

Shelby Ingram and Austin Dowdy received the Program of the Year award for the Student Experience Panel Series. This monthly student panel consists of students from different populations across UNC Asheville’s campus, who shared with their peers, faculty, and staff what their experience on campus has been like as a part of their specific population and ways that the campus community can better serve them.

Elina Morrison received the Emerging Leader of the Year award. Morrison is an active member of six student organizations, has participated in several service-learning opportunities including the Alternative Service Trip to the Elephant Sanctuary in Tennessee, and volunteers with the Energy Savers Network.

Meredith McLain received the Student Leader of the Year award. McLain has served as the Student Organization programming supervisor, president of She’s the First, chief of staff of the Student Government Association, a University Ambassador, a peer mentor for a freshman colloquium class, treasurer for the Political Science Club, and as a political science research intern.

Soni Pitts was given the Non-Traditional Student Leader of the Year award. Pitts serves as project manager for the new Food Equity Initiative, a new campus initiative to promote nutrition and food justice, and has been a program associate for the Key Center for Community-Engaged Learning for over a year.