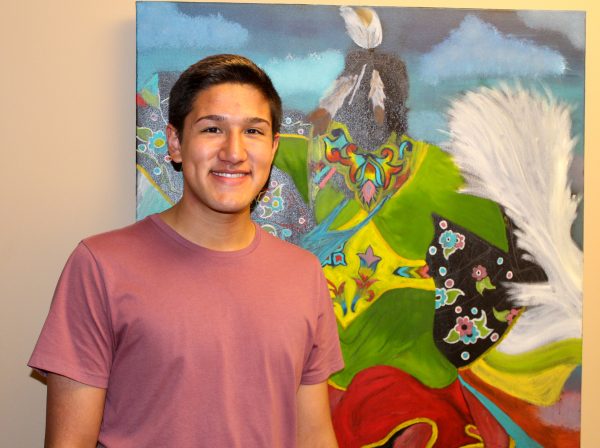 SCHOLAR: Nolan Arkansas, an EBCI tribal member and senior at Cherokee High School, has been accepted to both Yale and Stanford universities. (SCOTT MCKIE B.P./One Feather)

Nolan Arkansas, an EBCI tribal member and senior at Cherokee High School, has been accepted to two of the most prestigious universities in the country.  Now, he just has to decide whether to attend Yale University in New Haven, Conn. or Stanford University in California.

He was at his brother’s basketball game when he checked his email and found out that he’d been accepted to Yale which has a 6 percent acceptance rate according to U.S. News and World Report.  “I was so in shock that I didn’t really know how to feel so I didn’t get happy, I didn’t get emotional.  I just said, ‘hey, I just got into Yale’.  I looked at my mom and she was crying because she was happy.”

A similar situation occurred last Friday when he found out that he’d been accepted to Stanford who has an even lower 5 percent acceptance rate per U.S. News and World Report.  He was scooping ice cream at his job and he took a break and checked his email and found out.  “Again, I was just so shocked that I didn’t know how to feel so I just went back to making ice cream.”

Arkansas said he hasn’t made an official decision yet, but he’s leaning towards Yale.

While he is close to a decision on the school, he hasn’t decided yet what he will study.  “I’m interested in lots of things.  I like to write short stories and poems, but I’m also really interested in working with the Cherokee language.  One of the things I like about Yale is that it has one of the biggest archives of Cherokee language manuscripts.  So, if I go there, I will be able to study Cherokee linguistics and then come back and help with language and cultural revitalization.”

Yale and Stanford weren’t always on Arkansas’ radar.  “My first three years of high school, I was thinking that I would probably end up at UNC – Chapel Hill or the University of Tennessee.  But, in my junior year, I applied to a program called LEDA (Leadership Enterprise for a Diverse America), and that was a program for students who are from unique socio-economic backgrounds all across the country and it was hosted on the campus of Princeton University.”

While in the seven-week long program, Arkansas had the opportunity to visit the campus of Yale and also meet with representatives from Stanford.  He was also recently featured in a Washington Post article about programs such as LEDA.

This summer, prior to starting his college career, he will represent the Eastern Band of Cherokee Indians on this year’s Remember the Removal bike ride to Oklahoma.  Previously, he told the One Feather, “There’s been such a need, especially lately, for the community to get back in touch with both their culture and their history.  And, I felt that I should be a person to sort of propagate that and try to help out.  I feel that the bike ride is one of the first steps I need to take in getting back into both the culture and history.”

When asked what advice he would give to eighth or ninth grade students wishing to gain acceptance into a top tier university, Arkansas commented, “Get involved with things that you’re passionate about.  Make sure that you don’t have lots of days where you’re sitting at home doing nothing.  You want to make sure that you’re always involved in these extracurricular activities – these things that you can about and want to make better.”

He added, “Obviously, you have to have good grades all through high school, but it doesn’t stop there.  Good grades are not the only thing that matters.  You have to be taking all of the honors classes and the AP classes that your school offers.  You want to show colleges that you have a tough schedule and you’re managing it well.”