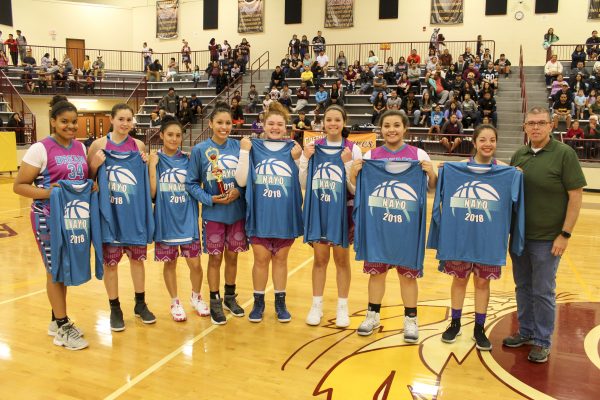 In what one organizer dubbed one of the most successful NAYO tournaments yet, a team representing the Eastern Band of Cherokee Indians took second place in the weekend-long event held in Cherokee.  The Dream Team, consisting of EBCI tribal members from several area high schools, took the runner-up trophy in the 15-17 girls division in the tournament.

They lost 59-44 to the Rainmakers, representing the Mississippi Band of Choctaw Indians, in the championship game held at the Charles George Memorial Arena on the evening of Saturday, March 31.

Timiyah Brown, a senior member of the Lady Braves basketball team, played on the Dream Team during the tournament.  “I think we played hard, and the championship game was really intense,” she noted.

Saturday’s game was a little emotional for Brown who was playing in her last game in the Charles George Memorial Arena, a venue she has spent the last four years playing in as a Lady Brave.  “It’s bittersweet.  It’s sad.”

Raylen Bark, a sophomore member of the Lady Braves, played with Brown on the Dream Team, and she was also happy to get to play with some of the other girls.  “It’s always great coming back to play together.  We grew up playing together.  All through travel league, we’d always play together, and now that we’re older, we all go to different high schools.  It’s a great feeling to just get back with the old team.” 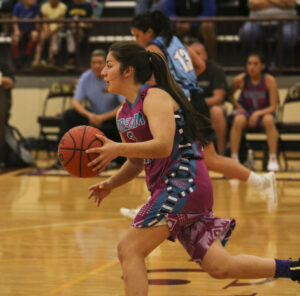 FAST BREAK: Sierra Wachacha, a member of the Dream Team representing the Eastern Band of Cherokee Indians, brings the ball up the court during the championship game on Saturday evening.

On the tournament, she commented, “We played really well I thought especially since we haven’t played together in forever.  It was a really great experience to get out there with them.”

The Silky Smooth Skins team, representing the Eastern Band of Cherokee Indians, took third place in the 15-17 boys division.  The championship game of that division pitted two teams from the Mississippi Band of Choctaw Indians, and in the end, 1 Family defeated IPONNA 85-69 to take the title.

Both of the finals of the 12-14 girls and 12-14 boys divisions pitted teams from the Mississippi Band of Choctaw Indians against each other.  In the girls final, Chaos defeated Team Hustle 64-57 to win the championship, and in the boys final, Tune Squad hit a three-point shot at the buzzer to win the title 65-62 over War Party.

Over 60 teams from four federally recognized tribes participated in this year’s NAYO tournament including 14 teams from the EBCI.

Peaches Squirrel, Cherokee Recreation Dept., was one of the organizers of the tournament.  “It’s been one of the biggest NAYO tournaments that we’ve had.  We had 67 teams, and it went great.  Everything stayed on time, and there was great competition in all divisions.”

She said the event is truly an intertribal affair.  “We have a national NAYO Board, and we have a meeting every October where all five tribes come together including: Poarch Creek, Mississippi Choctaws, Seminoles, Iroquois, and Eastern Band of Cherokee Indians.  The tournament rotates every year.  We make sure that we go over rules to see if anything needs to be changed to make sure that everything runs smoothly at each tournament.”

Big Cove Rep. Richard French, who also serves as the Tribal Council Recreation Committee chairman, handed out awards on the night.  He said the tournament is a great way to bring tribal nations together.  “With all of the different tribes we have at this tournament, it goes to show the strength and unity that we have as one people, and I think the more that we can keep doing things like this and building those relationships with other tribes will help us all.”