Cherokee High School hosted its annual Holidays on the Hardwood tournament in the Charles George Memorial Arena on Dec. 27-29.  A total of six girls teams and eight boys teams came from various states including Georgia, South Carolina, and Ohio. 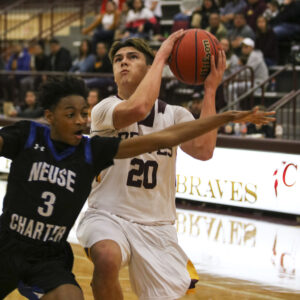 DRIVIN’: Holden Straughan (#20), Braves senior, drives inside against Neuse Charter’s Jamir Ledbetter (#3) during a first round game. Straughan scored 20 points in this contest and went on to be named to the All-Tournament team.
(SCOTT MCKIE B.P./One Feather Photos)

Northview Academy, from Kodak, Tenn., took first place in the girls tournament followed by Dawson-Bryant from Coal Grove, Ohio. Keenan (SC) took the boys title with a 72-64 win over Dawson-Bryant in the finals. Due to several teams dropping out on the girls side, their tournament was decided on a point system rather than a championship bracket system.

Tye Mintz, Braves senior, set a milestone as he scored the 1,000th point of his Cherokee career on a layup in the third quarter of a game on Friday.

Both Cherokee teams cruised through the first round on Wednesday, Dec. 27 with big wins over Neuse Charter.  The Lady Braves started things off with a 68-33 win followed by the Braves winning big over the Cougars 84-43. 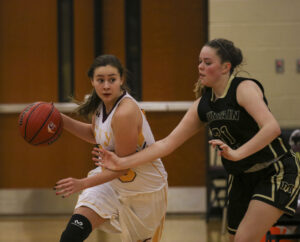 HUSTLIN’: Tori Teesateskie (#30), Lady Braves junior, moves past Mountain View’s Leslie Hodges (#31) during a second round game. Teesateskie scored 15 points in this contest and went on to be named to the All-Tournament team.

The next night, both Cherokee teams didn’t fare as well as the Lady Braves lost to the Mountain View Bears 76-63 and the Braves fell to the Dawson-Bryant Hornets (Coal Grove, Ohio) 72-66.

In the third round on Friday, Dec. 29, the Lady Braves met eventual champions Northview Academy.  While Northview led the entire game, Cherokee kept it to within ten at the half (33-23) and at the end of the third (45-35).  The Cougars, however, outscored Cherokee 18-4 in the final quarter to take a 63-39 win. 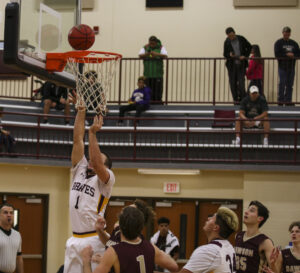 MILESTONE: With this layup in the third quarter of a game against Dawson County (Ga.), Tye Mintz (#1), Braves senior, scored the 1,000th point of his Cherokee career.

Earlier in the evening, the Braves played the Dawson County Tigers in the third place game.  Dawson County was up for the majority of the game which saw the point differential fluctuate frequently.  The Tigers led 23-18 at the end of the first and 47-33 at the half.  Dawson County led by as many as 14 points in the third, but Cherokee went on a 13-3 run in the final three minutes to only trail 60-54 going into the fourth period.  However, the Tigers outscored the Braves 23-13 in the fourth to take the 83-67 victory.