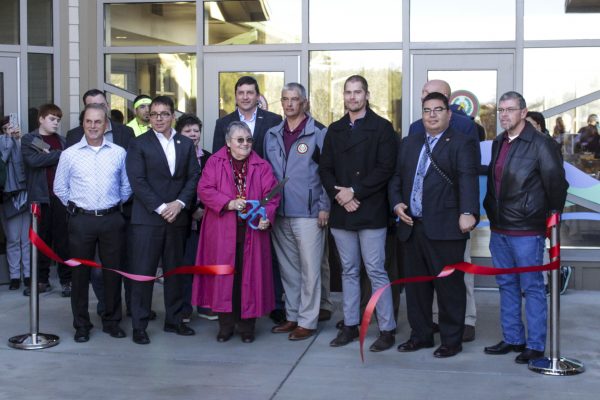 SNOWBIRD – The sunlight shone through the tall, glass windows almost as a beacon of hope as the Eastern Band of Cherokee Indians opened a residential treatment center. Kanvwotiyi, (Place where one is healed), was officially opened with a ribbon-cutting ceremony on the afternoon of Monday, Dec. 18.

“Greatness is not measured by what a man or woman accomplishes, but rather it is measured by the opposition that he or she overcomes in order to reach their goals,” commented Principal Chief Richard G. Sneed. “Suffering produces perseverance.” 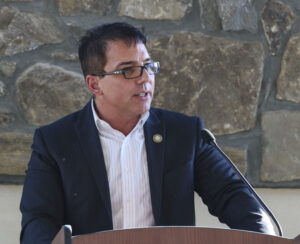 HEALING: Principal Chief Richard G. Sneed speaks during the opening of the Kanvwotiyi treatment center. Kanvwotiyi means “place where one is healed” in the Cherokee language.

Due to the isolated site of the facility, there were challenges in the construction process which began in August 2016.  “For the bulk of the project, there was no electricity” said Chief Sneed.  “There was no water, for the project’s duration, the construction crew had to use generators for power as well as for portable heat and air conditioning.  Extraordinary achievements are the result of extraordinary people.  One thing I am grateful for with the members of our Tribe is we have a can-do attitude.  When things are placed before us that seem impossible, we always find a way to overcome.”

Chief Sneed thanked Tribal Council for their support as well as that of the Cherokee Indian Hospital Authority governing board, and he recognized the following contractors who worked on the project: Cherokee Nation Construction, Cherokee Enterprise, Owle Construction, Cherokee Electrical and Mechanical, Huskey Painting and Design, and Jacob Ivey Sr.

“This means a lot for this community and this Tribe,” said Tribal Council Chairman Adam Wachacha. “For it to help the addiction problem. I know it has affected most every family here.”

The treatment center, which will include 20 beds, is about 20,000 square feet and cost a little more than $13 million according to Casey Cooper, Cherokee Indian Hospital chief executive officer. Fully staffed, Kanvwotiyi will employ 26 people with 22 of those being newly-created positions. Cooper noted that 18 people have currently been hired, 12 of which are from the Snowbird Community. 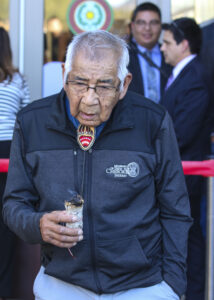 BLESSED: EBCI Beloved Man Jerry Wolfe provides a blessing for the Kanvwotiyi treatment center immediately prior to the ribbon cutting.

Former Tribal Council Vice-Chairman Brandon Jones, from the Snowbird Community, has been candid about his past struggles with addiction and was very instrumental in Kanvwotiyi coming to fruition.

“I am truly overwhelmed today,” said Jones who noted he was incredibly excited about the opening of the facility.  “Today, I feel like I came full circle.  I look around the building and the facility and the blessing that God has given us today.  This facility is a beacon of light in a world of darkness, just as Jesus Christ has been a light to me.  God never gave up on me because he had a plan for me.”

Jones said it is important to never give up on anyone.  “The money spent on this facility pales in comparison to the value of a human life that we can save.  Through Christ, all things are possible.”

Bo Taylor, a member of the Warriors of Anikituwah, sang several honor songs during Monday’s event, and he noted, “We shouldn’t be here.  As Cherokees, we shouldn’t be here.  With Andrew Jackson and all we’ve been through, we’re still here.  And, we’re not surviving, we’re thriving.  That is something that I want our people to believe in; that we can do and we can make it happen.”
Former Principal Chief Joyce Dugan, a member of the Cherokee Indian Hospital Authority governing board, said, “Our tribal government has always worked tirelessly to provide programs for solving some of our social issues.  Most of those programs have been successful, some have not been.  Those that haven’t been have been largely due to the fact that they didn’t have the support of the people they were designed to save or to help.  But, I can tell you that this project has 100 percent support from every person in this community.”

She added, “We know that it is one way that we can address our drug problem, and I am so thankful today that our Tribal Council was able to provide the resources, and I’m thankful that we have the resources to provide something very special for our people.”