ON THE SIDELINES: Unity through diversity will guide future of sports

It’s not every day that you get to meet and talk with an Olympic champion.  That’s exactly what happened this past week as Billy Mills, an Oglala Lakota from the Pine Ridge Indian Reservation and 10,000 Meter Run gold medalist at the 1964 Tokyo Games, visited Cherokee.

We visited prior to his speech to the students and he told me several stories of his youth including the first time he had ever set foot in a non-Indian family’s home, which was a little awkward for him at first, but turned into a nice visit.  Mills has endured racism galore in his life, but he never let it derail himself from his dreams and goals. 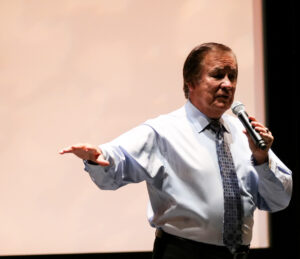 UNITY: Billy Mills, an Oglala Lakota from the Pine Ridge Indian Reservation and 10,000 Meter Run gold medalist at the 1964 Tokyo Games, visited Cherokee on Wednesday, Dec. 13. During a speech to Cherokee students, he noted, “I challenge you to join me in learning to be warriors of global unity. Through the beauty of global diversity, I challenge you to join me in trying to forge the horizons of our future.” (SCOTT MCKIE B.P./One Feather)

I’m a huge fan of the winter Olympics, and we’re just under two months away from the 2018 Winter Games in Pyeonchang, South Korea.  Athletes from over 80 countries will be in attendance for the games representing a worldwide diversity of races, ethnicities, and cultures.  All will be there to compete, but they will also be there to unite in their diversity.

The other evening I was watching the ISU World Cup Speed Skating event from Salt Lake City, Utah.  In that event, I witnessed athletes from 31 different countries competing in their different distances.  Now, I’m not going to say that sport is without controversy…we all know that isn’t true.  But, where else and under what other circumstances in the world can you get so many different groups of people together with little to no conflict?

Living by those words will help the future generations “forge the horizons of our future” as put so eloquently by Mills the other day.

Prior to the start of the Olympic Games, each athlete takes the following Oath, “In the name of all the competitors, I promise that we shall take part in these Olympic games, respecting and abiding by the rules which govern them, in the true spirit of sportsmanship, for the glory of sport and the honor of our teams.”

The honor of our teams…those words really resonate with me.  I’ve always told my daughter that life is all about respect.  If people respect each other and their own, individual right to liberty, then common ground can be found no matter their backgrounds.  That tenet is really what the Olympics and sports in general are all about – finding that unity through diversity.

As you watch the Winter Olympics Opening Ceremonies on Feb. 8, 2018, make a conscious effort to notice the differences in the athletes, but then pay more attention to their unity.  That’s what truly makes the difference.

Nobel Peace Prize recipient Desmond Tutu once stated, “We inhabit a universe that is characterized by diversity.”

He’s right, so, we might as well embrace it and all get along – sports will help as long as we listen to Billy Mills and unite through our diversity.