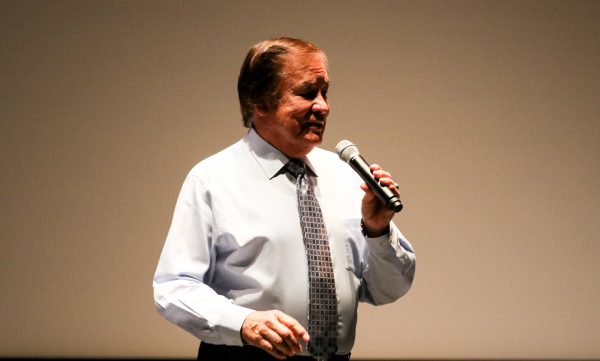 Students at Cherokee Central Schools had the pleasure of meeting and listening to the wisdom of an Olympic champion on Wednesday, Dec. 13.  Billy Mills, an Oglala Lakota from the Pine Ridge Indian Reservation in South Dakota, won the 10,000 Meter Run at the 1964 Tokyo Olympics.  He spoke to the students in the Chief Joyce Dugan Cultural Arts Center about the importance of believing in oneself and promoting unity through diversity.

“Your ancestors, my ancestors, have laid footprints on Mother Earth that tell a true story, the true histories of tribal nations in the United States of America,” said Mills.  “And, we must never, never let the winds of change erase their footprints from Mother Earth.  We must learn from them.  We must come together as a country.”

Mills came from behind to win his gold medal, the only American to this day to win at that distance.

“It’s the journey, not the destination that empowers me,” he told the students noting that he put in over 50,000 miles of training.  “It’s the daily decisions we make in life, not the toughness that we possess, that choreographs our destiny.”

Following the death of his mother when he was eight years old, Mills’ father told him that he had to look beyond the anger, hate, jealousy, and self-pity he was feeling.  His father told him, “All of those emotions will destroy you.  Look deeper, way down deep where the dreams lie.  Find your dreams son.  It’s the pursuit of a dream that heals broken souls.”

After graduating from Haskell Indian School, which was a high school at the time he attended, Mills was awarded a full scholarship to the University of Kansas.  A three-time NCAA All-American in cross country, he was also on the 1959 and 1960 outdoor track national championship teams.

During summers, he would work long hours, sometimes sleeping in cars and bathing in a creek.  “Those weren’t hard times.  I had a dream.  I had a passion.  It was something I had to go through.”

Mills said the need has never been greater than now for global diversity.  “It is the high school students, your age group, that will make that magic happen and make this the country, the promise land, for all of our citizens.”

Some of his many honors include: induction into the United States Olympic Hall of Fame (1984), recipient of the 2012 Presidential Citizens Medal awarded by President Barack Obama, recipient of the Theodore Roosevelt Award (NCAA’s highest honor) in 2014, and the President’s Council on Fitness, Sports, and Nutrition Lifetime Achievement Award in 2015.