ON THE SIDELINES: Cherokee fans won’t get a ring, but they deserve one

The Cherokee Braves hoisted the 1A State Championship trophy on Saturday, Dec. 9 in a wet, snowy, and cold Carter-Finley Stadium in Raleigh.  The trophy was easy to lift because not only the players were helping to hold it up, but they were also being helped by a legion of loyal fans and an entire nation – the Eastern Band of Cherokee Indians.

All season long, the Braves have been supported by some of the most loyal fans in high school sports – anywhere!  How loyal are they?

Well, the fact that hundreds, maybe even a couple of thousand, came out for Saturday’s game shows that dedication and loyalty.  On Friday, Dec. 8, those of us who live on the Qualla Boundary (aka the Cherokee Indian Reservation) woke up to a blanket of snow with more coming down all day.  No worries…we took our time and made the trek, which turned into a much longer trip than usual, to Raleigh over snow-covered Balsam and Black Mountains, and through slush-infested roads, all to support a team.  But, that’s what true fans do.

I wasn’t able to get an exact count of Cherokee’s fans in attendance on Saturday, but visually, they greatly outnumbered the opposing side’s base.  That is generally the case. 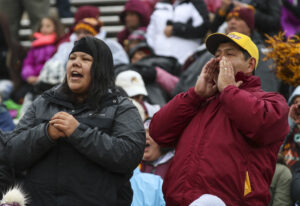 FANS: Cherokee Braves fans, such as Kelsey Jackson (left) and her father Tuff Jackson, showed up in full force to support the team in Saturday’s 1A state title game in Raleigh. (SCOTT MCKIE B.P./One Feather)

Cherokee fans of all ages came out for this game.  There were tribal elders, teenagers, adults galore, students, younger kids, and even a few babies in car seats (no fear, the ones I saw were snuggled up in layers of Pendleton blankets and covered completely by rain tarps – they were at cozy level twelve).

When you’re greeted at the gate by Principal Chief Richard G. Sneed handing out free Braves rally towels, you know the game is big, and you know the team is supported.  His office and that of Vice Chief Alan B. Ensley, one of the biggest Braves supporters out there, sponsored the towels, and in addition to Chief Sneed and Vice Chief Ensley, there were enough Tribal Council representatives present to constitute a quorum.  The Tribe provides that level of support which is incredibly rare and quite remarkable.

The game itself was tough.  The conditions were probably tougher.  But, the Braves and their fans both prevailed on that fateful Saturday.  That championship banner will forever hang in Ray Kinsland Stadium as a testament to the work ethic of a team and their coaches but also as a reminder of what can happen when a community, emphasis again on unity, comes together to support one another.

Olympic champion Usain Bolt once stated, “I’d like to say to all my fans out there, thanks for the support.  And, to all my doubters, thank you very much because you guys have also pushed me.”

There were those, I’m sure, who doubted that Cherokee could finish their goal.  But, that’s ok…those types of things make great locker room bulletin board fodder.

I’d like to conclude with an observation.  After the game, Cherokee’s players were obviously elated at winning the school’s first football state title, but they still took the time to shake hands with, and in some cases hug, the North Duplin Rebels team.  The Braves are good athletes, but more importantly, they’re good sports.

I’ll leave you guys with words from the late, great Vince Lombardi, “After all the cheers have died down and the stadium is empty, after the headlines have been written, and after you are back in the quiet of your room and the championship ring has been placed on the dresser and after all the pomp and fanfare have faded, the enduring thing that is left is the dedication to doing with our lives the very best we can to make the world a better place in which to live.”