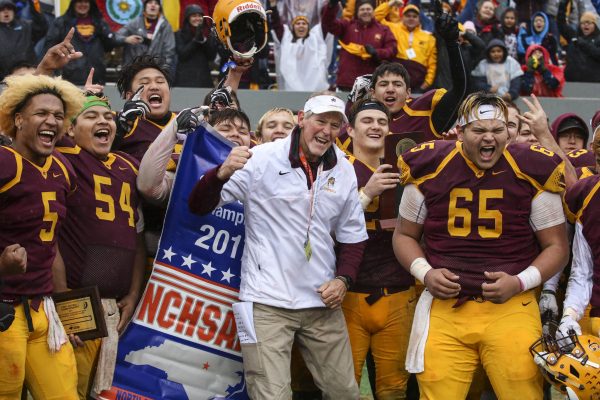 RALEIGH – Neither rain nor sleet nor snow could keep the Braves from their appointed round of picking up their first state title this weekend.  Cherokee (14-1) topped previously undefeated North Duplin (14-1) by a score of 21-13 to win the 1A State Championship, the first in school history, at Carter-Finley Stadium at North Carolina State University in Raleigh on the afternoon of Saturday, Dec. 9.

“We said from the very first practice that the only goal we had this year was to win the state championship,” Kent Briggs, Braves head coach, said during a postgame press conference.  “We did that.  We believed in each other, and we worked our tails off to get in this position and I’m so proud of our guys.”

In his pre-game talk, Coach Briggs spoke to his players about the magnitude of the game.  “I told them if we can just respect each other, play for each other, and love each other all the way to the end, great things are going to happen, and it did today.” 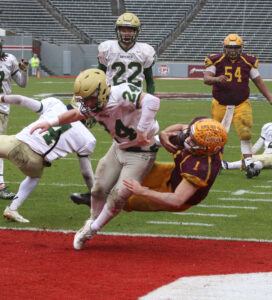 LEAP: Tye Mintz (#1), Braves senior quarterback, leaps sideways into the end zone, past North Duplin’s David Price (#24), for a score in the third quarter. On the day, Mintz carried the ball 13 times for 111 yards and two touchdowns and was named the game’s Most Valuable Player.

Mintz, game MVP, completed 6 of 12 passes for 52 yards and he carried the ball 13 times for 111 yards and two touchdowns.

In the postgame press conference, he spoke highly of his teammates and Coach Briggs stating, “He’s the one who keeps us going at the end of the day.  Nobody sees it, but he’s got a really tough fight.  We see it because we’re looking every day.  I feel like he brought us closer so we did what we had to do for him.”

One of the game’s highlights was a 51-yard touchdown run by Mintz in the fourth quarter that put Cherokee up by a score.  “After that long run and we got the two-point conversion, that’s when I felt the game was ours, but we knew we still had to play defense and make our stops.”

Due to several turnovers, Cherokee was held scoreless in the first half.  North Duplin went into the locker room up 7-0 following an 11-yard touchdown run by Colby Bass midway through the second quarter.

“They did a nice job defensively, and they kept the ball offensively.  Sometimes, that’s the best defense you can have,” said Coach Briggs.  “We came out in the second half and just played our game..after the first half, we knew we didn’t play our best game we could play and the in the second half, we got out there to do what we could do.” 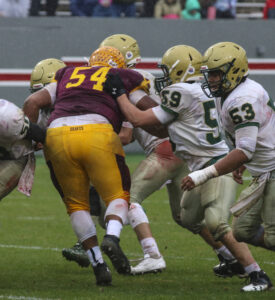 I GOT THIS: Zak Perez (#54), Braves defensive lineman, takes on multiple North Duplin players. On the day, Perez had nine tackles to lead Cherokee, and he was named Defensive MVP for the team.

Coach Briggs said stopping William Archer, North Duplin quarterback, would be a key to the game.  On the year, Archer gained more than 1,800 yards on the ground averaging over 130 per game.  On Saturday, Cherokee’s defense held him to half of that (19 carries for 65 yards).

“When we did stop him (Archer), we’d stop them,” noted Coach Briggs.  “I’ll have to give him a lot of credit.  He’s a real competitor and a good football player.”

Perez said the Rebels’ veer offense was very hard to practice for, but the Braves held them to 203 total yards of offense, down from their usual 332 per game.  On the game, Perez had nine tackles to lead Cherokee followed by Mintz with 8.5 and Damian Blanton 6.5.  Mintz also had an interception in the game.

“I really stepped up and left it on the line because I really wanted this for our community and our coaches,” said Perez.  “I wanted everyone to be proud of us. It feels amazing.”

In the second half, Cherokee got on the board with a 5-yard touchdown run by Mintz with 4:38 left in the third quarter.  He followed that up with his long run early in the fourth to make it 13-7 with 11:22 left in the game.  Following a North Dublin fumble on their next possession, Evans added another Cherokee score on an 11-yard run to make it 21-7.  The Rebels added one more score in the game as Kenny Sheppard ran it in from four yards out to make the final score 21-13. 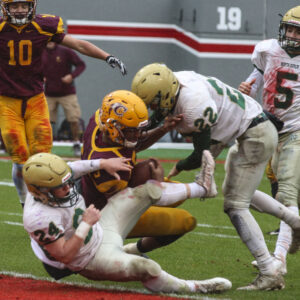 SCORE: Isaiah Evans (#5), Braves junior running back, powers between North Duplin defenders David Price (#24) and Arthur Pigford (#22) for a score to seal the deal in the fourth quarter. On the day, Evans carried the ball 19 times for 100 yards and one score and was named Offensive MVP for the Braves.

Cherokee’s fan base showed up in full force even in the face of a snowstorm that hit Friday, Dec. 8.  One of the Braves’ biggest fans and supporters over the years has been Will Poolaw who has served as the team manager continuously for 17 years.  “It feels great.  We’ve been waiting for this for a long time, since I moved to North Carolina, to be able to bring a state championship to the crowd.”

“This one is for Mr. (Ray) Kinsland for all he does for us and our coaches,” Poolaw added.  “Thanks to all of the fans who came to Raleigh from Cherokee.”

Peanut Crowe, Cherokee Central School athletic director, commented, “This is just unreal, unbelievable.  I couldn’t be no more prouder of this group of kids.  It’s just unbelievable how good they did.”