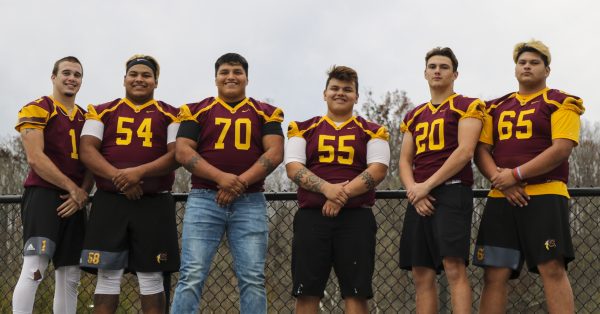 ALL-STARS: Senior members of the Cherokee Braves varsity football team have been named to several post-season All-Star games set for Saturday, Dec. 16. Tye Mintz (left) has been named to the Shrine Bowl at Wofford College in Spartanburg and Zak Perez, Byron Locust, Will Davis, Holden Straughan, and Demetryus Bradley have all been named to the FCA East vs West Classic at Fannin County High School in Blue Ridge, Ga. (SCOTT MCKIE B.P./One Feather)

Several senior members of the Cherokee Braves varsity football team have been named to different All-Star game rosters.  Tye Mintz has been added to the Shrine Bowl roster, and Demetryus Bradley, Will Davis, Byron Locust, Zak Perez, and Holden Straughan have all been named to the FCA East vs West Classic.

Mintz, Braves quarterback who accounted for over 3,400 yards of total offense (1,988 yards passing and 1,593 yards rushing) was actually selected for his work in the season as an outside linebacker.  On the year, he had 66 tackles, five tackles for loss, and three interceptions.

The Shrine Bowl is set for Saturday, Dec. 16 at 2pm at Wofford College in Spartanburg, SC.  For more information, visit: http://shrine-bowl.com/ The FCA game is set for Dec. 16 at 1pm at Fannin County High School in Blue Ridge, Ga.

Bradley, Davis, Locust, and Perez were all named to the FCA game as offensive linemen.  They anchored the Braves offensive line this season fostering two 1,000 yard rushers (Mintz with 1,593yds and Isaiah Evans with 1,329yds).  Cherokee averaged 278.4 rushing yards per game due to their blocking.

Straughan will play in the FCA game as a defensive back.  On the year, he had 53 tackles, five tackles for loss, two sacks, two interceptions, and one fumble recovery.

Other area players will join the Braves on the North Carolina team for the FCA game including: