BAKERSVILLE – For the first time in 39 years, Cherokee (13-1) will be playing for a shot at a state football title.  The Braves went on the road on the evening of Friday, Dec. 1 to defeat the Mitchell Mountaineers (12-2) in the regional final game by a score of 42-28.

“I’m just so proud of this football team,” said Kent Briggs, Braves head coach, after the game.  “We said we had to stick together all season, and we did.  We believed in each other.  Even when we started out and they got ahead, we didn’t flinch.  I’m so proud.  We’ve come so far by believing in each other, and that’s what got us this victory tonight.  We just kept fighting and did the things that we had to do to win.” 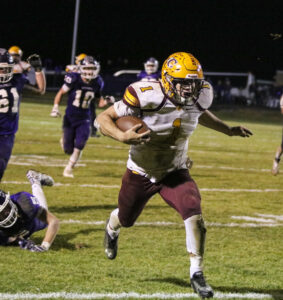 BEAST MODE: Tye Mintz, Braves senior quarterback, leaves a trail of Mitchell defenders on a run during Friday’s game. On the night, he amassed 300 total yards including 146 on the ground and accounted for five touchdowns (three rushing, one passing, one receiving).

With the win, the Braves advance to the 1A state championship game on Saturday, Dec. 9 at 12pm in Carter-Finley Stadium on the campus of North Carolina State University in Raleigh.  They will face the undefeated North Duplin Rebels (14-0) who beat Plymouth 12-6 on Friday night in the 1A East Regional final.

“One thing about our football team is that they’ve done really well on the road,” said Coach Briggs.  “We came up here, and we’ve been undefeated on the road.  I said we’ve got one more road game to go, and we’re very happy to play there and play for a state championship.  We’ve got a lot of work to do, but we’re going to enjoy this victory today and then start working towards next Saturday starting tomorrow.”

Tye Mintz, Braves senior quarterback, overcame two early interceptions to lead the Braves offensively with 300 total yards.  He completed 9 of 13 passes for 151 yards and one touchdown, and he rushed 23 times for 146 yards and three touchdowns.

“This is the best feeling I’ve ever had,” he said immediately following the game. “I can’t even describe it in words.  “We kept our head up, and we kept fighting.  We kept putting our faith in our coach and God.  No matter how much adversity hit us, we kept coming right back at them.  All glory to God and coach.  They’re the best we could ask for.” 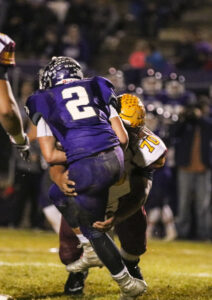 Cherokee’s defense was led by Tye Mintz, Byron Locust, and Holden Straughan – who along with several other teammates have played together since youth football – with seven tackles each.  Of the win and the team advancing to the state championship game, Locust commented, “It feels good.  We worked hard for this.  We worked all summer.  I’ve been playing since pee wees for this opportunity right here.  It’s a blessing.  I know my teammates, who I’ve been playing with forever, we have all been working hard for this.”

Straughan noted, “It’s a dream come true.  This is the stuff you dream about at night when you’re laying your head down.  It’s amazing.  I’m glad to be doing it with these boys. They are my brothers, and I wouldn’t do it with anyone else in the world.”

On the night, he also had a fumble recovery and caught five passes for 54 yards and a touchdown in addition to throwing a 3-yard touchdown pass on a trick-play to Tye Mintz.

Looking to next Saturday’s game, he noted, “Every week we have to get to work.  There’s a lot of flaws in this game.  We have to take care of them.  North Dublin is a veer team, so we have to run our veer defense and stop them like we did Swain.” 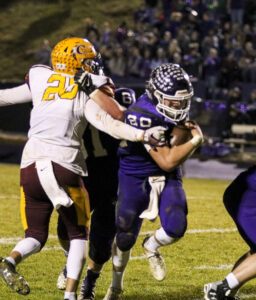 HOLDIN’: Cherokee’s Holden Straughan (#20) fights off a hold from a Mitchell lineman en route to tackling Ben Robinson (#20) in the first half of Friday’s regional title game. On the night, Straughan had seven tackles.

Cherokee amassed 455 total yards of offense on the night.  Helping Tye Mintz on the night was Isaiah Evans, junior running back, who carried the ball 28 times for 152 yards and one touchdown.  Cade Mintz, sophomore wide receiver, caught four passes for 97 yards and had one interception on defense.

Mitchell jumped out on top first with a 15-yard touchdown by Brody Smith five minutes into the first quarter.  The Braves tied the game two minutes into the second quarter as Tye Mintz ran three yards for his first rushing score of the night.

Midway through the second, Evans recovered a Mitchell fumble at the Braves 3-yard line, and Cherokee started a 97-yard drive that culminated in a 15-yard touchdown pass from Tye Mintz to Straughan.

Following a Mitchell punt, Cherokee got the ball back and drove down with the clock winding down before the half.  The Braves got one more score in though as Straughan hit Tye Mintz on a 3-yard end-around touchdown pass, and Cherokee led 21-7 at the half.

Cherokee extended its lead in the third as Tye Mintz dove in from one yard out just five minutes into the quarter.  The point-after failed, and the Braves led by 20 (27-7).  Mitchell answered just one minute later though as Ben Young ran 40 yards for a score to make it 27-14 midway through the third.

With one minute left in the third, the Mountaineers were driving and Cade Mintz intercepted a pass and returned it inside the 5-yard line to set up another Tye Mintz rushing touchdown.  The Braves led 35-14 at the end of the fourth.

Cherokee would score once more on a rushing touchdown by Evans, and Mitchell got into the end zone two more times on two Young touchdown passes – one each to Noah Pitman and Jesse Pitman.

“This is a long time in the making here,” said Peanut Crowe, Cherokee Central Schools athletic director.  “There are two people that I wish were still alive to see this, and that is my grandpa John, he was such a Braves fan, and my dad.  I would love for them to be here because they were 100 percent through and through Cherokee Braves!”

He went on to note, “This right here should prove to our younger kids what the value of a weight room and hard work is and all they have to do is take the example of our head coach. The man takes treatment every day and then he comes in.”