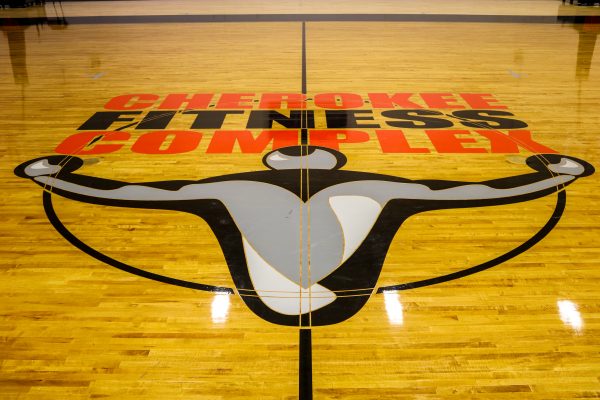 NEW FLOOR: The Cherokee Fitness Complex logo is emblazoned in the middle of the new basketball court floor in the facility. (SCOTT MCKIE B.P./One Feather photos)

The Cherokee Fitness Complex was undergoing some minor renovations over the summer and fall, and those upgrades are nearly complete.  The main areas of improvement included a replacement of the old Trane ventilation system, replacement of the basketball court surface, renovation of shower areas, and the draining and pressure washing of the pool.

“The Trane system is up and running,” said James Bradley, EBCI Secretary of Education, who noted previously that replacing the system will allow better air flow in the pool area which had really high humidity before.  “They’ll do their final modifications once the pool is filled with water to make sure that it’s taking everything out of the air that needs to be taken out. That’s all set and ready to go.”

Bradley said the basketball floor re-surfacing is complete.  “We’re in the process of taking down the old rims that are attached to the ceiling.  We’ve got new rims that are mobile that most NBA courts have now so that we can utilize that space in different ways.” 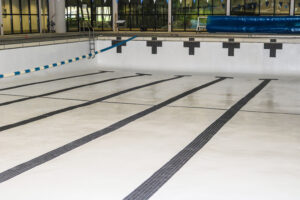 ALMOST READY: The pool at the Cherokee Fitness Complex has been drained, pressure washed, and EBCI Facilities Management has patched a few, small hairline cracks. It is tentatively set to re-open to the public on Friday, Dec. 22.

The pool is tentatively set to re-open on Friday, Dec. 22.  Bradley noted, “The insurance company sent someone out and had it inspected, and they did their report.  And, then, just to make sure everything was ok, they wanted to get an engineer here that specializes in pools.”

He added, “We got that report, and there were some hairline cracks on the edge of the pool, but the engineer said that was nothing to worry about and it could be fixed.  So, Facilities came in and patched those.  So, the pool has been painted.  All of the repairs have been made.  Everything has been pressure washed and cleaned up.”

Bradley said the Cherokee Fire Department is tentatively set to come over next week and fill the pool.  “We will let that set for a couple of days, and the pool company that we work with out of Franklin will come over and do all of the chemicals and get that set back up.  Then, we’ll have to keep testing that until we get those levels back up to what they need to be.  People will see water in the pool, but the pool’s not going to be ready yet.  Another reason for that is that you have to take a shower to get into the pool, and the showers are almost finished.”

The locker rooms are almost finished as well, and the new shower areas, complete with tile, are being painted.  “The women’s side is about 75 percent complete, and men’s is about 60,” commented Bradley.  “Once we can open up the changing rooms again and people can take showers, then they’ll have access to the pool.” 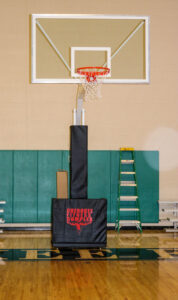 GOALS: New, mobile basketball goals are now being utilized at the Cherokee Fitness Complex for a better utilization of the available space. The rims that were suspended from the ceiling are in the process of all being removed.

One new amenity that is coming soon is a smoothie bar.  “There’s an area right beside the basketball court that is glassed in and was originally supposed to be a smoothie bar, but it never became that.  So, they put a drainage area in there, and we already have the ice machine.  We’ve already contracted with a smoothie company, and we’ll be opening a smoothie bar right after the New Year.”

Bradley said many of the upgrades will be especially attractive to EBCI tribal employees.  “You’ll be able to go over, do your workout, take a shower in the nice, clean, new showers, grab a smoothie on the way out and go back to work.”

He added that he would like to thank the community for their patience during the renovations.  “I know it’s been very arduous and annoying for people that want to utilize the pool, but we wanted to do everything at once and get everything done so that when we open back up everyone can utilize all of the spaces in the Fitness Complex.

Most of the renovation work has been completed by Owle Construction Company, a TERO-certified vendor.

A grand re-opening event will be set for early 2018. 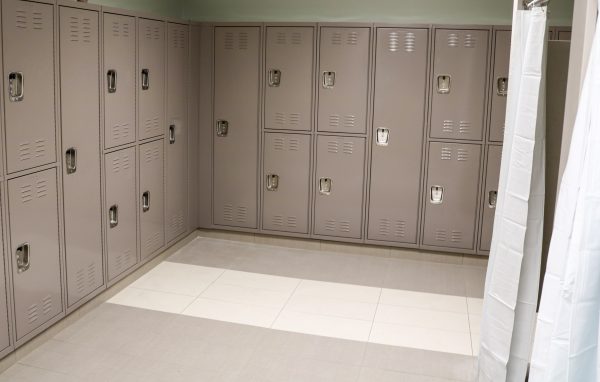 NEW: The photo shows part of the new locker and shower areas.