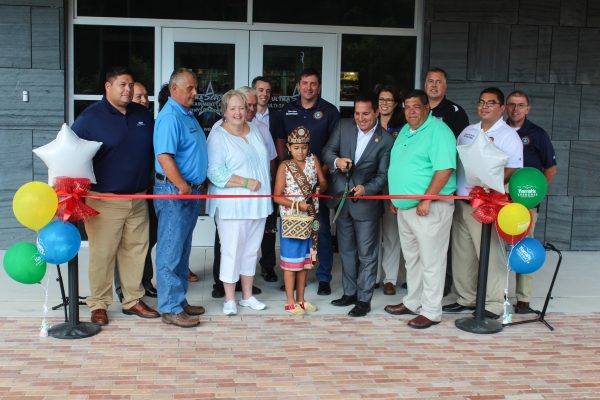 With the cutting of a ribbon, Little Miss Cherokee Nevayah Panther and Principal Chief Richard G. Sneed opened the new UltraStar Multi-Tainment Center at Harrah’s Cherokee on the afternoon of Tuesday, Aug. 29.  The Center, which contains 24 bowling lanes, a game center, a restaurant, and other amenities, will open to the public on Friday, Sept. 1.

“This place is out of this world,” said Annie Owens, an EBCI tribal elder, who hit the lanes with other elders and community members moments after the ribbon cutting on Tuesday.  “I didn’t expect it to be like this.  I expected it to be just like a regular bowling alley, but when I walked in that door, I just about cried.  This is awesome.”

EBCI tribal elders who participate in the Senior Games were a big reason for the construction of the project.  Toni Tahquette said she is planning on taking up the sport.  “I like it!  I don’t know how to bowl so I’m going to learn.  I think it’s great.  If they’ll bring in bowling tournaments here, I think that’s a great thing.  I am thrilled!” 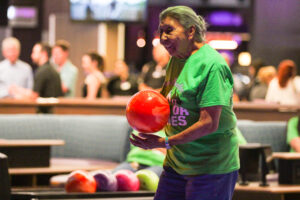 TIME TO BOWL: Moments after the ribbon was cut, Edith Crowe, an EBCI tribal elder, was on the lanes enjoying a game of bowling.

Prior to the ribbon cutting, various officials made remarks on the project which broke ground on July 19, 2016.  “It’s hard to imagine that we started construction on this facility about 400 days ago,” said Brooks Robinson, Harrah’s Cherokee regional senior vice president and general manager.  “Four hundred days ago, we were given the charge to put this facility together, and I have to say I think they’ve done a very good job.”

He added, “I really want to thank everyone associated with this project.  Thank you for all that you’ve done to help support us.”

Chief Sneed noted that although the project only took 400 days, the idea for the project started officially in 2001 when Yellowhill Rep. B. Ensley and then-Birdtown Rep. Jim Owle, who is now the TCGE Board of Advisors chairman, brought forth a resolution to build a theater and a bowling alley in Cherokee.

The original idea that Rep. Ensley and Owle acted upon was brought up in 1998 by the Junaluska Leadership Council.  Flash forward 15 years, and Tribal Council passed a resolution, submitted by then-Principal Chief Patrick Lambert, during Budget Council on Feb. 3, 2016 to build the Center.

“It’s been a long time coming,” Chief Sneed said during Tuesday’s event.  Through all the years, he noted, “The big selling point was the elders need some place to bowl.” 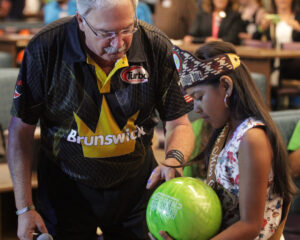 He went on to say, “This is a concerted effort between the Tribe, TCGE, TGC, our relationship that we have with Caesars and Harrah’s, which is an outstanding relationship and we’re so grateful for that partnership.  It’s because of the hard work of all of the employees and staff here at Harrah’s Cherokee Casino Resort and Harrah’s Valley River Casino that we, as a Tribe, have the benefits that we have and we have the ability to provide services for our people.”

Adam Saks, Dynamic Entertainment Group, LLC, president and chief operating officer, commented, “We are so honored to be a part of this…to the folks who started this project that care so much and to the members of the Eastern Band of Cherokee Indians, I want to say thank you for your passion, your drive, and your vision to bring this to life.”

The normal hours of operation will be Sunday – Thursday from 10am – 12am and Friday and Saturday from 10am – 2am.  The rates will vary on a daily basis based on volume.  The Center will have various specials for bowling including: