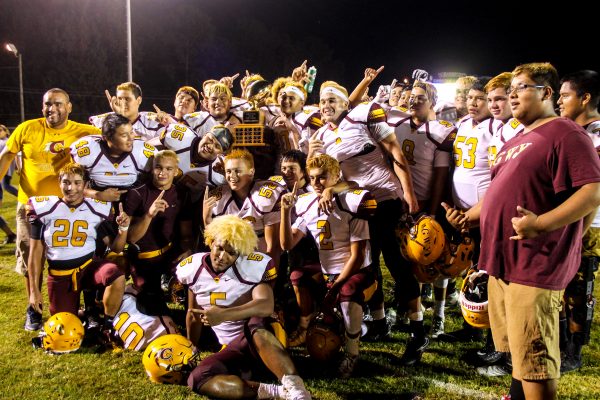 VICTORIOUS: The Cherokee Braves celebrate their win in the Battle of the Nations over the Choctaw Warriors in Philadelphia, Miss. on Friday, Aug. 25. (SALLY DAVIS/One Feather)

PHILADELPHIA, Miss. – The Cherokee Braves (2-0) put up almost 500 yards of offense as they won the Battle of the Nations game for the second consecutive year over the Choctaw Central Warriors (0-2) on Friday, Aug. 25.  The Braves’ high-powered offense, which gained a total of 472 yards on the night, was led by junior running back Isaiah Evans who rushed 9 times for 153 yards – a whopping 17 yards per rush average – and three touchdowns.  Tye Mintz, senior quarterback, rushed 8 times for 103 yards and two touchdowns and completed 3 of 8 passes for 110 yards, one touchdown, and one interception.

Both teams had two turnovers, a fumble and an interception each.  Cherokee had 17 first downs in the game and Choctaw had 14.  Choctaw had 274 total yards of offense on the night, most of which was due to quarterback Alex Ben who went 8 of 19 for 212 yards, three touchdowns, and an interception.  The Warriors’ top rusher was Tristan Gibson who ran 19 times for 38 yards.