ON THE SIDELINES: Sports can teach life lessons…if we let them

Well, my first thought is that they haven’t attended many mountain basketball games.

But, seriously, they bring up some interesting points in their commentary which starts with the statement that participation in sports “teaches important life lessons”.  They point to the fact that high school student-athletes have higher GPAs and less school absences than those who don’t participate and state, “They also develop the kind of work habits and self-discipline skills that help them become more responsible and productive community members.” 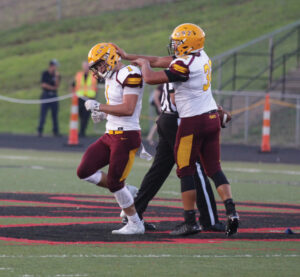 I will agree with the statement on work habits wholeheartedly.  Anyone who has ever practiced football in August or is still going after those mid-practice wind sprints for basketball should not be considered lazy or listless.  Athletes have to work just to be able to play their sport.  It takes practice just to be able to practice effectively.

Anyone who questions an athlete’s work habit and ethic should check out a track or cross country practice run by Eddie Swimmer, Braves head running coach, or a volleyball drill session run by Brianna Lambert, Lady Braves head volleyball coach.

Legendary basketball coach John Wooden said it best, “Ability may get you to the top, but it takes character to keep you there.”

Sports definitely build character if you let them.  If you are the type of person who is prone to quitting when the going gets tough, sports can help with that…if you let them.  Oftentimes, teammates are the best at inspiring each other.

While on the sidelines at games, I do my best to keep out of the player’s way while I get my photos and take my game notes.  While there though, it’s impossible not to witness their interaction, and it’s fascinating.  I wish every fan could get a glimpse into that world just once.

For instance, at the Braves opening night game at North Buncombe on Friday, Aug. 18, I saw several players really working hard to inspire their teammates.  Byron Locust, Braves senior lineman, was getting his fellow players fired up all night long, both on the field and off.  Holden Straughan, Braves senior wide receiver, was out of pads for the first game due to an off-field injury, but he surely didn’t let that affect his play.  Yes, his play.  See, Holden is always one of the more animated players on the field.  Just because he was off the field, he didn’t let that stop him from encouraging the boys all night long.  Byron and Holden showed character that night.  They exhibited a life lesson, encouraging your teammates.  Later on in life, teammates will be known as co-workers and encouragement only helps the entire team albeit a football team or a company team.

One other point that Gardner and Tucker make in their commentary is that of unity.  They wrote that sports “teaches that we can live in different communities, come from different backgrounds, faiths, and cultures, cheer for different teams, and still have a common bond.”

With all of the junk going on in the world today that seeks to divide us, coming together for a few hours to watch a sporting event can only help to bring us a little closer back together.  Sure, there are rivalries and sometimes they get heated, but even those emotions pale in comparison to the political and social spewings that we all hear and deal with on a daily basis these days.