Four members of the Cherokee Braves 2016 varsity football team were named to the All-Smoky Mountain Conference team.  Those players, including Tye Mintz, Byron Locust, Holden Straughan, and Zak Perez are all back for the 2017 campaign except this year they’re seniors.  Last year’s team went 9-5 and made it to the 1A West Regional semi-finals.  This year’s team is hoping for more and starts their 2017 campaign at North Buncombe on Friday, Aug. 18 at 7:30pm. 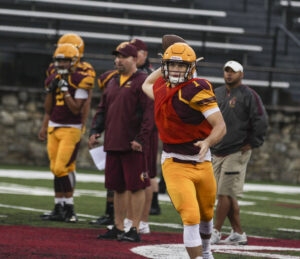 LEADER: Tye Mintz, Braves senior quarterback, rolls out for a pass during a scrimmage against the Erwin Warriors at Ray Kinsland Stadium on Friday, Aug. 11. (SCOTT MCKIE B.P./One Feather photos)

“We’ve been working hard,” Kent Briggs, Braves head coach, said after a scrimmage against the Erwin Warriors at Ray Kinsland Stadium on Friday, Aug. 11.  “I think the scrimmage was good for us.  We played a really good football team, and we did some really good things.  Obviously, we’re not ready to play the first game yet, but we’ve got another week to go.  I was really proud of the way some of the guys stepped up.”

He noted that the Braves didn’t run a lot of their offense during Friday’s scrimmage to avoid showing too much of their hand before the season starts.  “Defensively, I think we did a nice job against Erwin’s quickness and the things that they do, and I was proud of the effort. We just have to watch the film and get better.”

Last season, Mintz was one of the top passers in western North Carolina with 1,870 yards passing, 1,028 yards rushing, and 30 combined touchdowns.  Straughan was one of his main targets and caught 44 passes for 518 yards and 6 touchdowns.

On Mintz, Coach Briggs commented, “He’s gotten better every year, and we just hope he does this year what he’s done the last two years in getting better.  He’s a large part of our offense and our defense.  He’s got a lot of experience, and he’s got some players around him that have a lot of experience.” 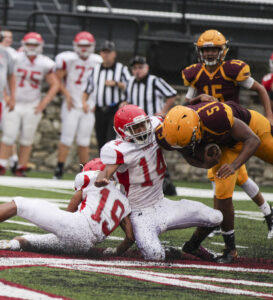 Locust, who made a crucial fourth quarter sack that sealed a Braves victory over Choctaw Central in last year’s Battle of the Nations game, was second on the team last season with 81 total tackles.  Perez, a part of an iron defensive line, had 61 tackles last season and plans to add more this year.

“Byron (Locust) and Zak (Perez), Will (Davis), Holden (Straughan), all those guys have done a great job over the last three years,” Briggs commented.  “All of them have been really good leaders, and they’ve been doing a nice job of helping this football team get better every year, and I’m looking forward to seeing their  senior year.”

Briggs ended with, “I think we can do some great things this year if we can stay healthy.”