Hope Huskey and Jacob Reed, both EBCI tribal members, have been selected to receive the Native American 40 under 40 award from the National Center for American Indian Enterprise Development (NCAIED).  The awards will be presented at the Northwest Enterprise Development Conference at the Tulalip Resort and Casino in Tulalip, Wash. next month.

“This very special award recognition was created nine years ago to acknowledge those emerging Native American, Alaska Native, and First Nation citizens between 18 and 39 years of age who have demonstrated leadership, initiative, and dedication to achieve significant contributions to Native communities throughout North America,” Chris James, NCAIED president and chief executive officer, said in a letter to Huskey and Reed.  “You are a true embodiment of what the NCAIED stands for, and a shining example of the economic future and advancement of Indian Country.” 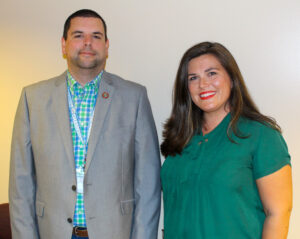 Huskey, who is the associate director of the Sequoyah Fund, noted, “It is always nice when someone from this community can be recognized, especially since there aren’t a lot of Indian tribes around us.  It’s nice to put us with the rest of the group.”

Reed, EBCI Commerce Division economic analyst, commented, “A lot of other Indian tribes are ahead of us as far as enterprise and economic development so to me it feels like we’re sort of playing catch up.  It helps us with our standing with those other tribes.”

While at the Northwest Enterprise Development Conference to receive her award, Huskey is also slated to moderate a panel on project management and small business development.  Reed will be unable to attend the Conference as he is helping to run and execute the upcoming Blue Ridge Run.

Both are optimistic about the future of economic and enterprise development within the Eastern Band of Cherokee Indians.  They also credit Gloria Griffin, Cherokee Enterprise Development Center manager, with helping them get started in the field.

“I think since they passed the LLC last week, it’s going to be a huge boost for us to be able to develop things on the Boundary and also off-Boundary,” said Reed.  “So, we can either invest as equity partners in a project or do start-ups on our own.  It really just opens up a lot of doors for us to do things that we previously weren’t able to do.”

Huskey noted, “I like the idea of the Tribe expanding outside of just Cherokee and us looking at opportunities at different places and then, also our ability to help grow small businesses here in Cherokee and provide opportunity for our members.”

Huskey is a member of several boards including the Cherokee Boys Club, Mainspring Conservation Trust, Jackson County Arts, and the Nikwasi Initiative.  She received her bachelor’s of arts degree in literature from UNC Asheville and her master’s degree in project management from Western Carolina University.