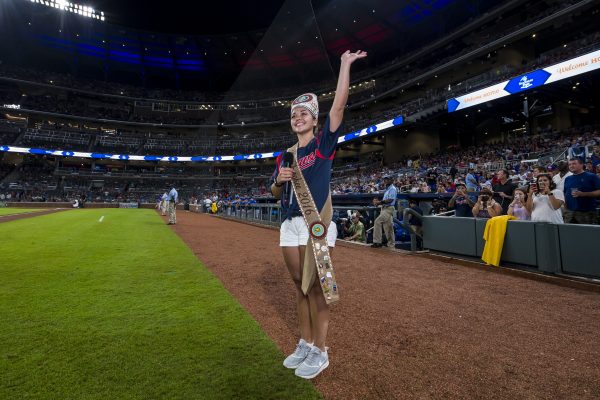 Siyo! July was a very busy, fun month for me! Myself, along with the other princesses, rode in the 4th of July parade in Gatlinburg, Tenn. We had so much fun and won first place for our float!

I attended the Choctaw Indian Fair in Mississippi. While there, I was able to introduce myself, share a gift with Chief Phyliss Anderson, and watch their Miss Choctaw pageant. Every girl represented with such style and grace and I was honored to be able to watch it!

Shortly after I got back from Mississippi, I began the folkmoot festival. This takes place in Waynesville at the Folkmoot Center. Many countries came from all over the world and showed off their country’s traditions and cultures. Cherokee was featured in this program, and I was honored to be able to carry our tribal flag into many events. I also got to ride in the Folkmoot parade. This was the second year that Folkmoot had a Cherokee Ambassador Day, and I got to be one of the tour guides for the day. I took the country of Slovenia around Cherokee and showed them the beauty of Cherokee while I gave them our history. I would like to say sgi, thank you, to the Folkmoot staff, especially Lisa Wilnoty, for allowing me to be so involved this year!

As many people know, and for those that do not, my platform is bringing awareness to childhood cancer but more specifically childhood brain tumors. I had the opportunity to sell Atlanta Braves tickets as a fundraiser. I raised over $1,000 that will be donated to the Pediatric Brain Tumor Foundation! Because I was able to sell all the tickets, I got the chance to go on the field before the game and say “Play Ball” as Miss Cherokee. I was so honored and blessed to have had this opportunity!

I will be hosting my 3rd annual 5K race with the theme being “Race you to the castle” – a Disney themed 5k. I encourage everyone to come out, dress up, and help raise money for a great cause! If anyone would like any additional information, please feel free to contact me at amoriegunter@yahoo.com.