(Note: This article is being republished in full with permission from the Coalfield Progress.)

Wise County guys with a big idea and an expert connection are headed over Pine Mountain Friday morning to debut their idea for economic growth at Eastern Kentucky’s premiere development event, SOAR — Shaping Our Appalachian Region.

They want to build a casino in Jenkins, Ky., and that little independent city across the state line from Wise County wants to help them.

The growth of jobs and the economy would be immediate and far-reaching, including into Norton and Wise and Dickenson counties in Virginia and perhaps even farther, says James Hibbitts, a native of Jenkins who’s lived most of his life in Wise. 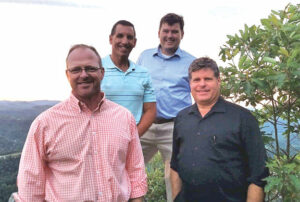 Hibbitts said he and his partners in Raven Rock Entertainment know they’ll face some opposition to the gaming facility they have in mind — a mini-casino and resort modeled after one in Murphy, N.C.

But they also know what opportunity it presents. The one in Murphy turned around that declining textile town in a matter of just a few years, Hibbitts said. They’ve been there and talked to businesses, town officials and economic developers. Literally hundreds of direct jobs would be created, Hibbitts said, many of them high-paying positions, and then as-yet untold numbers of spinoff positions and development.

“You’re talking some coal miner’s wages here,” Hibbitts said, with salaries of $70,000 to $80,000, $40,000-$60,000 and then running the gamut. As happened in Murphy, the plan is to engage community colleges in training for wide-ranging positions, perhaps 800 to 1,000, across a 300-room lodge with about a 150,000-square-foot gaming floor and all connected to hiking and biking trails, ziplines and other outdoors recreation on Pine Mountain.

In a television interview Wednesday, Jenkins City Manager Todd Depriest said he had talked to the mayor in Murphy and views the Raven Rock proposal “from good neighbors” as an opportunity to “make a difference from now on.” It could be an anchor to tourism, he said, and hopes people would “see that it’s an idea that is working” elsewhere and would “try to give it a shot.”

The group faces many hurdles, Hibbitts acknowledges, like those pesky little matters of land to put it on, money to develop it all and, oh, having to change gaming laws in the commonwealth of Kentucky to permit it.

That move is underway simultaneously, he said, in a state that is home to thoroughbred horse racing, the Kentucky Derby and Churchill Downs. Horse tracks now have slot machines. Not only that, keno games and the lottery are available in every convenience store in Kentucky, says partner Gary Stratton, a native of Lawrenceburg, Ky., who’s worked in business and economic development while also teaching at the University of Virginia’s College at Wise. 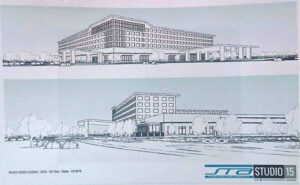 He’s returning to Kentucky this fall and won’t be far from the state house in Frankfort, where he’s already at work spreading the word about the need to change gaming laws as gambling floors are opening in Lexington, Franklin and Louisville.

“Expanded gaming is not such a stretch,” Stratton said, noting the state’s laws have been expanded three or four times already. “We have a history of this.” The push now is to get the question on the ballot, he said.

Along with Hibbitts and Stratton, the Raven Rock Entertainment partnership includes businessmen Kevin W. Mullins of Wise and Erik Sneed of Cherokee, N.C., who brings casino experience to the table and has family connections in Haysi.

It was in that small Dickenson County town where the inspiration for a casino came to Hibbitts, a one-time banker who’d been living mostly a comfortable life in Wise County. Then, after 25 years of working throughout Wise, Dickenson and Lee counties, Hibbitts got laid off at the end of 2013 as downturns in the coal industry rippled to hit those on its outskirts.

Hibbitts spent six months without a job. Then he got hired as a car salesman but was making half of what he had been and had no health insurance.

“If you’ve not lost your job, you don’t understand what it’s like out here,” Hibbitts said. “It’s a whole different world.”

He pulled a stint with Halliburton, driving into Ohio and West Virginia, until the bottom dropped out of the natural gas industry and everyone he was working with got laid off.

He went to work for Pikeville Medical Center in January 2015 and that’s where he met Depriest. For the past year and a half, Hibbitts has been working at a car dealership in Pennington Gap.

“I have struggled the whole way,” he said. “But that’s the way of our world right now.”

Helping ease that struggle is driving Hibbitt’s passion for the project. He said the hairs rise on the back of his neck as he thinks about Raven Rock Entertainment’s debut Friday. If you’ve been sitting at the courthouse with comfortable jobs in Wise for 40 years, “you can’t even start to understand what your people are going through. You have no idea,” he said.

Hibbitts was conducting monthly inventory at a Haysi convenience store one Friday where they had to wait three hours for a group of old fellas to finish scratching off lottery tickets. His traveling partner observed, “Those ol’ men over there need a casino . . . I came up out of my seat.”

That’s it, he said, and in that instant set about his work to find out more information, partnerships and support. A close friend in Clintwood introduced him to Sneed. Mullins, a best buddy, banker friend and successful businessman, was on board as was Stratton.

A more positive gaming climate is part of what prompted the group to think Kentucky first rather than Virginia. They’re confident the benefits will pour into Southwest Virginia, too, Hibbitts said, adding that he hopes Norton and communities in Wise and Dickenson counties “will meet us at the state line” with their support.