The Eastern Band of Cherokee Indians will soon own a small tract of land in Franklin that sits adjacent to the historic and culturally-significant Nikwasi Mound.  During the regular Budget Council session on Tuesday, Aug. 1, Tribal Council approved legislation to purchase the land, approximately 0.59 acres, for $400,000 from Mainspring Conservation Trust, Inc., a non-profit organization.

“I am happy to have the support of the Tribal Council of the Eastern Band of Cherokee Indians in providing for the purchase of land adjacent to the Nikwasi Mound in Franklin, North Carolina,” said Principal Chief Richard G. Sneed.  “It is important to our people to protect our heritage and acquiring an important parcel of land will ensure that future generations of Cherokee people have access to our historic sites. We are happy to partner with Mainspring Conservation Trust to create a heritage corridor which provides recreation and teaches Cherokee history.” 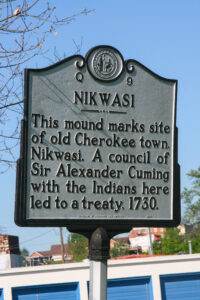 According to the legislation, which passed on Tuesday by a 10-0 vote (Big Cove Reps. Richard French and Teresa McCoy were absent for this vote), “…the land and improvements purchased by the Tribe shall be used to preserve the significant historical and cultural value of said lands, promote awareness and education of Cherokee history and culture, and be explored for potential economic development and/or cultural preservation activities.”

In the same legislation, Tribal Council authorized $100,000 be used from Endowment Fund No. 2 “for the purpose of assessing the highest and best use of the land and improvements for cultural preservation and economic development opportunities.” 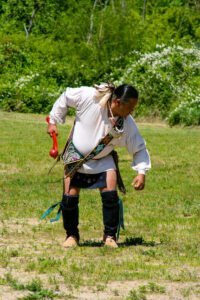 CELEBRATE: Ernest Grant, a member of the Warriors of Anikituwah, dances at the Nikwasi Mound Celebration held in 2008.

He added, “There are currently 25 archaeologically-known mounds in western North Carolina.  These mounds were seemingly built over the past 3,000 years.”

In recent years, tribal officials have advocated purchasing the Mound itself.  In the spring of 2012, maintenance workers with the Town of Franklin sprayed herbicide on the Mound leaving dead, brown grass.  This angered many within the Tribe.

“I would rather own the mound and let us take care of it,” then-Principal Chief Michell Hicks told the One Feather in May 2012.  “That would be my preference because I know that we’ll do the right thing.  The right thing to do, just like Kituwah, just like Cowee, is to bring it back into the hands of its original owners.”

A request for comment from Mainspring Conservation Trust went unanswered by press time.