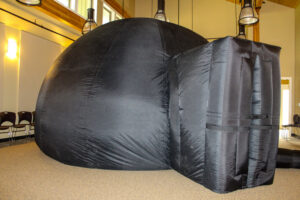 SHOW: A planetarium dome will be set up in the Ken Blankenship Wing of the Museum of the Cherokee Indian for the month of August. (SCOTT MCKIE B.P./One Feather photos)

“The Museum is always trying to be innovative, and we’re trying to bring some new things to the Museum,” said Bo Taylor, Museum executive director.  “We’ve got a change in exhibit coming, and this is hopefully a lead-in into doing more things that are interactive so you don’t just come and experience our fantastic exhibit, but you get to see other things as well.  We’re trying to expand on what we’re doing.”

He added, “I’m excited about this.  One thing we want to constantly be doing is changing and bringing new things to the Museum and to Cherokee.”

The planetarium show lasts approximately 20 minutes and explains the scientific principles behind a solar eclipse.  This coincides well with the preparations undergoing now for the upcoming solar eclipse on Monday, Aug. 21 of which Cherokee is in the sliver of the United States that will experience a total eclipse that day.

Dawn Arneach, Museum executive assistant, contacted Dr. Patricia Reiff, a Rice University professor of physics and astronomy, about the possibility of bringing the planetarium to the Museum.  Dr. Reiff also leads ePlanetarium, a company that distributes planetarium domes and equipment.

Arneach traveled to Houston, Texas recently for a one-day training session with Dr. Reiff on the proper set-up and operation of the planetarium dome. 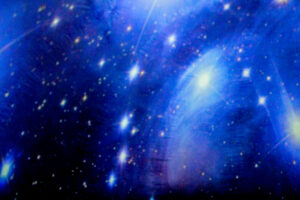 STARS: This photo shows part of the exhibit from inside the dome.

She said the show will surprise people.  “I don’t think anyone’s expecting it.  I keep going back to the TV show, ‘The Big Bang Theory’.  A lot of kids have not been involved in science and math, and then ‘The Big Bang Theory’ comes on, and there’s been a growth of kids involved.  Who knows, maybe they’ll want to learn to do shows that would be shown in a dome or become astronomers and find out more.  I hope it enhances the kids that come in and look at it and that they take away something with them that they want to do more.”

The dome was shipped to the Museum in three bags including the dome, a projector, and other equipment.  When complete, the Museum will ship it back.

“Our planetarium shows are truly immersive because they present the viewer with images, in front, behind, above, and on both sides of their seat,” Reiff said in a statement.  “People love these shows, and they are a great vehicle to teach Earth and space science, but unfortunately full-sized planetariums require six projectors, working in conjunction with six different computers.”

She said their dome planetarium “aims for a wider audience through the development and distribution of a small, fully portable system that uses an inflatable dome and single-projector display”.

The planetarium will be open at the Museum seven days a week from 9am – 5pm through the end of August.  Two shows are planned an hour.  The cost is $5 per person, and EBCI tribal members receive free admission with their tribal enrollment card.