VACANT: A resolution will be discussed in the Aug. 3 Tribal Council session which calls for the demolition of the old Cherokee High School building, located off of Acquoni Road, which has sat vacant since 2009. It’s been costing the Eastern Band of Cherokee Indians an average of $1,273.82 per day in utility costs according to numbers provided by EBCI Commerce officials. (SCOTT MCKIE B.P./One Feather)

Tribal Council will consider a resolution during its upcoming Budget Council session on Tuesday, Aug. 1 that calls for the demolition of the old Cherokee High School building located on Acquoni Road.  The resolution, submitted by the Tribal Planning Board at the direction of the July 12 Tribal Council working session, states, “The existing old high school building is in ill-repair from years of sitting vacant and numerous types of vandalism, this building poses a safety and health hazard to our public.”

The old high school building has sat vacant since 2009, and it’s been costing the Eastern Band of Cherokee Indians an average of $1,273.82 per day in utility costs according to numbers provided by EBCI Commerce officials.  That works out to $38,745.21 per month and $464,942.50 annually.

The submitted resolution would also authorize the Commerce Division and the EBCI Finance Division to secure funding for the demolition of the building.  An exact amount is not included in the resolution, but Commerce officials did relate during the July 12 working session that a full demo would cost $783,660 while a selective demo, which would entail going down to the basic structure for the building, would cost $1,091,207.

In a Planning Board meeting on Monday, July 17, Commerce officials presented four options for the high school site including: Multi-Sports complex, some form of niche retail, cultural diversity with retail, and a five-star grocery store with retail.

“Of those four projects, the number one project that they liked was the Multi-Sports Complex, and that would be in conjunction with other sports facilities we have in Cherokee,” said EBCI Commerce Secretary Dr. Mickey Duvall.  “If we’re going to go to a national level and get some national teams in here, we’d have to do some work at John Crowe (softball/baseball complex) to get it up to par.”

He further explained the use of the 21.4 acre old high school site, “We’ll have to coordinate what we build up there with what we already have.  Obviously, if we’ve got enough softball fields, we don’t need to build softball fields.  But, if we need a multi-purpose facility to hold wrestling tournaments or others, we’ll build it up there.” 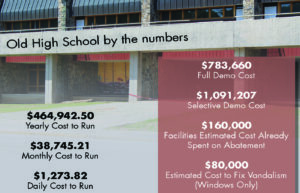 (One Feather infographic with numbers sourced from EBCI Commerce)

Doug Cole, EBCI Economic Development strategic planner, related that the Multi-Sports Complex will be modeled in part after the Rocky Top Sports World Complex in Gatlinburg, Tenn.  That facility is almost four times as large as the old high school site.  “The only way you could offer anything in terms of volume would be to incorporate the John Crowe Center and other things that we have on the Boundary.”

Secretary Duvall said the preliminary thought would be to incorporate some sports-related retail into the Multi-Sports Complex.  “We’ve got some opportunity there, and we’ve had some retail outlets that have already expressed an interest in leasing.”

Cameron Cooper, EBCI Commerce retail development specialist, commented, “What that adds as far as community development, at least around Saunooke Village, is it will give it an anchor over there so people will be flowing through that area again because of the proximity to the retail down there.  So, people in the area may actually want to invest in that part of town again.  We feel like it will help tie Cherokee in especially with the potential water park that may come in as well having it as the anchor point there, and an anchor point where the casino is.  So, we’re pretty much making sure that we have all the three major synergy areas covered with some type of attraction that brings people to that point.”

During the July 12 working session, Principal Chief Richard G. Sneed commented, “Granted, it would be nice to have an administrative building there.  It would be nice to have cultural things there or anything of the sorts, but whatever the decision is, we have to be honest with ourselves that right now our spending is outpacing the amount of revenue that can be generated by gaming.”

In that same meeting, Birdtown Rep. Travis Smith advocated for the demolition of the building, “The numbers aren’t there for this building.  We moved out of it and built a new school for a reason, because it was old and it was run down and there were problems with it.  I think that it’s time has come and gone.”