BOOK REVIEW: “Killers of the Flower Moon” a killer read

“Killers of the Flower Moon: The Osage Murders and the Birth of the FBI”, by David Grann, is a masterfully told tale that will draw the reader in. It presents historical information in a way that holds your attention and keeps you reading even if you are not a history buff. It is a fine example of the journalistic genre that Truman Capote introduced with his book “In Cold Blood”, the non-fiction novel.

In the early 19th century, the Osage Indians were stripped of their ancestral homeland in Missouri, Arkansas and Kansas, almost 100 million acres and they were forced to live on a section in southeastern Kansas. The Kansas parcel was approximately four million acres.  When white settlers began squatting in Osage territory, the Osage were forced to sell their land for $1.25 an acre.  The Osage found land in what was to become Oklahoma. The land was not suited for cultivation and generally unwanted by farmers and settlers. They paid around $1 million for the land where they settled. In the early 1920s, it was discovered that there was oil under the unwanted land that the Osage had purchased. The discovery of oil under the Osage land made them the richest people per capita in the world.  In 1923 alone, the tribe took in more than $30 million, the equivalent of today more than $400 million. Following the new-found wealth of the Osage Indians came a period where at least 24 tribal members were murdered, and it may have been many more. 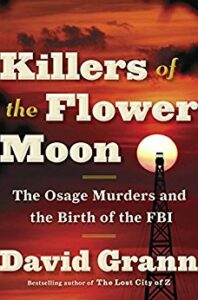 The wealthy period of time in Osage history is what New Yorker staff writer David Grann, #1 New York Times best-selling author of “The Lost City of Z”, explores in his new book. Grann’s new book reads like a murder mystery, but is a true-life crime story about one of the most horrific crimes in American history. Not only will the twists and turns of the book keep your interest; it is also a well-researched example of the prejudice, harsh treatment and blatant disregard toward Native Americans in the 20th century.

In the 1920’s, Osage Indians built mansions, had chauffeured-driven cars, had white servants, and sent their children to be educated in Europe. The federal government also had “management “over the Osage Indians stating that they were incapable of managing their money. The federal government would classify the full-blood Osage Indians as “incompetent” and would assign a white “guardian” to oversee their money. Some of the mixed blood Osage Indians could manage their own affairs. This “guardianship program” resulted in the Osage Indians being the victims of theft, fraud and exploitation. This era of financial wealth was also a dark period for the Osage. The Osage refer to the period from 1921 when the first murder occurred until an arrest was made in 1926 as the “Reign of Terror”.

The family of Mollie Burkhart watched as her whole family was murdered. Her sister was shot, her mother was poisoned, another sister and brother-in-law died when their house exploded. After the number of deaths reached 24, the newly formed FBI was brought in to investigate. At the time, the young director, J. Edgar Hoover, sent a former Texas Ranger named Tom White to Osage country to consider the murders. In 1925, White had an undercover team of FBI agents investigate, including the only Native American agent in the bureau. They used the latest modern techniques in detective work.

Although the FBI did eventually arrest and convict men for the Osage murders, it was believed that they did not act alone, that there was a larger conspiracy. Grann explored and delved into old documents and interviewed anyone he could find with knowledge about the old murders. After years of research, Grann reached a startling conclusion, that perhaps hundreds of Osage had died during the murderous spree. He was even able to identify one killer who had never been prosecuted.