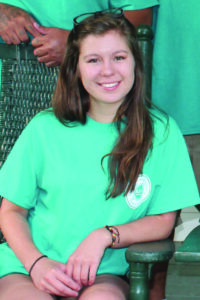 REPRESENTATIVE: Kayla Johnson, an EBCI tribal member and a fellow in the Jones-Bowman Leadership Award program (JBLA), has been selected to serve as the Region 7 Representative for the American Indian Science and Engineering Society (AISES). (Photo courtesy of Jones-Bowman)

Kayla Johnson, an EBCI tribal member and a fellow in the Jones-Bowman Leadership Award program (JBLA), has been selected to serve as the Region 7 Representative for the American Indian Science and Engineering Society (AISES).

She is currently studying engineering at the University of Mississippi in Oxford, Miss. This appointment gives Johnson the opportunity to be an ambassador for the Eastern Band of Cherokee Indians and collaborate with other native students on a national level.

Alicia Jacobs, JBLA program leadership specialist, notes, “It is important that our students participate on a national level to gain experience networking with members of other tribes. This further develops their leadership skills and ultimately benefits the EBCI as a whole when they return to the community.”

Lisa Paz, from the AISES organization, stated, “We are happy to announce that Kayla Johnson (EBCI) has been elected as the new Region 7 Student Representative. AISES college chapters are divided into seven geographical regions, each with its own Regional Student Representative. Regional Reps serve as liaisons between the National AISES Office and the national and regional student body. Regional Student Representatives are elected by the members in that region. Student Representatives evaluate common issues and concerns and make recommendations for ways to improve AISES’ member services. AISES’ Region 7 is made up of the southeast United States: Alabama, Delaware, District Of Columbia, Florida, Georgia, Kentucky, Maryland, North Carolina, South Carolina, Tennessee, Virginia, and West Virginia The mission of AISES is to substantially increase the representation of American Indians, Alaska Natives, Native Hawaiians, Pacific Islanders, First Nations and other indigenous peoples of North America in science, technology, engineering and math (STEM) studies and careers.”

The Jones-Bowman Leadership Award Program is a program under the Ray Kinsland Leadership Institute, a department of the Cherokee Boys Club, and is funded by the Cherokee Preservation Foundation.