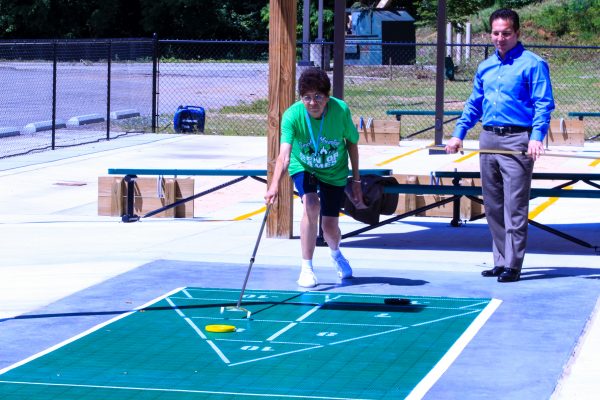 The vision of one Cherokee elder has been fulfilled.  Jody Taylor, an EBCI tribal elder from the Birdtown Community, put in legislation several years ago for the Cherokee Senior Athletic Center to be built so participants in the Senior Games can practice certain sports without having to leave town.  Ground was broken on the project in October 2016, and a ribbon-cutting ceremony was held for the Center, located in the Birdtown Community, on the afternoon of Thursday, July 13.

“This is a milestone for my seniors,” said Janelle Rattler, Cherokee Life Recreation Senior Games coordinator.  “This is something they have been working for for a long time.” 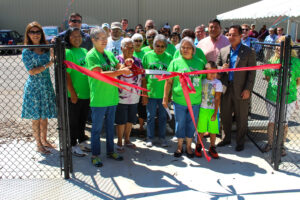 She thanked tribal leaders including Tribal Council, Principal Chief Richard G. Sneed and his office, and the prior administration of former Principal Chief Patrick Lambert for their help in the project.  “Without all of them and without Jody Taylor putting this resolution in and them approving it, you know, this is a milestone that I know you all will enjoy from here on out…there is no reason not to bring home some gold medals now.”

“It’s a great day today,” said Chief Sneed.  “This is an outstanding project, and anything that we can do to help our seniors to be successful in the Senior Games, I think that just the ability to come over here and stay active and build community that way is extremely important.”

Taylor commented, “This year, Sept. 30, will be four years since I put that resolution in, and I didn’t think it was ever going to happen.” 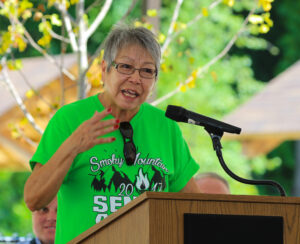 She added, “I appreciate all the work that Janelle (Rattler) has done.  I put the resolution in and went to meetings, but she’s the one that pushed it.  She pushed.  She knew the contractors.  And, I sincerely want to thank (former Chief) Patrick Lambert too because without him it would still be in the back room somewhere.”

Taylor said the Center is for all.  “This is not just for us senior citizens.  It is for everybody, and it’s not just for Birdtown.  It’s for the whole Qualla Boundary.  The only thing we want from people who come is for it to be taken care of.”