Can you hear me now?  Ground broken on new cell tower in Birdtown 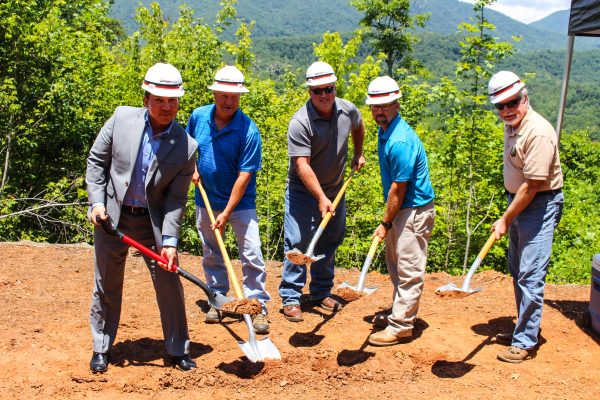 At the top of a mountain in the Birdtown Community, ground was broken for a new cell tower on the afternoon of Monday, July 10.  Located at the end of Jim Bowman Road, the new tower is a joint venture between the Eastern Band of Cherokee Indians and Verizon Wireless.

“This is a big occasion for us,” said Rick Colcord, EBCI Office of Information Technology director.  “It’s been coming for a long time.  The impact of this program is going to be immeasurable.”

Colcord said this is the first of six towers being constructed in Cherokee. The next two will be constructed in the Long Branch and Ravensford areas.  Three more are planned for Hyatt Cove, Barnett Knob, and Big Cove; additionally, a smaller pole based system is currently being deployed in the Snowbird area.  Three of the towers are being paid for by the Eastern Band of Cherokee Indians, and the other three will be paid for by Verizon.

Once built, the Tribe will be able to lease space on those towers to other companies as well.  The Tribe will be building the fiber to each of the towers.  “We’re building 45 miles of new fiber in the ground right now,” said Colcord. 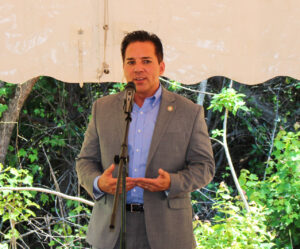 He thanked several recent IT retirees for their work on the project including Cherie Rose, former director; Bob Long; and Lloyd Arneach Jr.  Colcord said the tower in Birdtown, a 180-foot structure costing around $1 million, should be complete and online by October.

He related that after talking with many of his peers throughout the country that the venture is “unprecedented”.

“Because it is an unprecedented project, there is no road map for getting approvals and timeliness,” said McGuire.  “It’s been a very fluid situation so there’s been a lot of work…it’s a great partnership.”

McGuire went on to note, “The coverage this is going to provide for tribal members around the reservation is going to be phenomenal.  Cellular coverage is becoming a thing like having water or having electricity; it’s just a necessity.”

Principal Chief Richard G. Sneed said, “This really is an exercise in tribal sovereignty.  It’s one of those projects that, as a Tribe, we need to continue to think outside of the box.  We’re unique because we’re a government, that is true, but more importantly, we’re a sovereign nation.  So, we can exercise our authority and we can exercise our sovereign rights by doing joint projects in the private sector that bring services to our people.”

He added, “Cellular service has become a utility in the sense that we think of the right to clean water and the right to indoor plumbing and electricity and everything else.  I think the challenge is to make sure that our communities understand that nothing is a right.  It’s all a privilege really, and we are privileged to be a part of a Tribe, a community, where we have the opportunity and the resources to provide these services for our people.”