Doug Trantham, Cherokee Indian Hospital Behavioral Health Department director who oversees the Analenisgi program, is stepping down from his post.  Freida Saylor, an EBCI tribal member who has been with the program since 2012, is taking over as director.

“It has been an honor to serve as Behavioral Health director for almost four years,” Trantham said.  “We face a deadly crisis, and the losses are hard to bear.  But, the Cherokee people have many strengths.  Recovery is happening every day.”

He praised his co-workers and their efforts.  “Cherokee Indian Hospital has an amazing board of directors, executive team, and staff.  The tribal government and community are incredibly supportive of individuals struggling with addiction and psychiatric illness.  Increasingly, community members are stepping up to lead the way forward.” 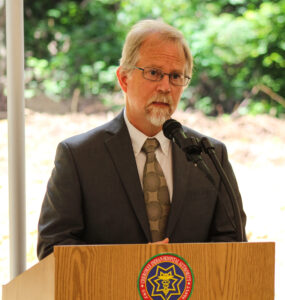 Trantham said the transition in leadership should be seamless.  “Because of my need for reduced work hours, we implemented a leadership transition over the past year.  I will continue serving at the hospital in areas where I am needed, such as expansion projects and development of new services.”

Highly educated, Saylor brings experience and knowledge to her new position.  She has held several positions within Analenisgi since starting including master’s level therapist, behavioral health consultant, behavioral health consultant lead, and most recently as assistant director.  Saylor earned two bachelor’s degrees from Western Carolina University including business and social work, and she earned a master’s degree in social work from the University of Central Florida.  She is currently working on her Ph.D. in Human Services from Capella University. 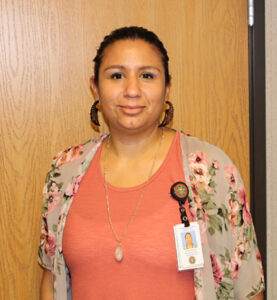 DIRECTOR: Freida Saylor, an EBCI tribal member, is the new director of the Analenisgi program.

“I’m a community member,” Saylor commented.  “I was born and raised here, and many community members are my family and friends.  Some of the things they struggle with, I’ve struggled with and still continue to struggle with.  I don’t pretend to know it all by any means, but I understand the impact of the issues that we have in this community has on our people.  I want to help be part of some kind of solution.”

She is ready to tackle the hard problems.  “Of course, we definitely want to address the opioid crisis that we have right now in the community.  It really seems like it has hit a peak in the past month or so.  One of the things I would also like to focus on is prevention, and education for the community is a big piece of that as well.”

She also wants to work collaboratively with other tribal agencies.  “I would like more coordination with other tribal entities.  We have some now, but I’d really like for us to talk more so we can get more on the same page going forward.”

Dr. Carmaleta Monteith, Cherokee Indian Hospital Authority Board of Trustees chairperson, had nice things to say about Saylor and Trantham.  “Freida Saylor has dedicated her life’s work to our community, and her dedication has led her to serve as the new director of the Analenisgi Program. On behalf of the Board of Cherokee Indian Hospital, we congratulate her on this accomplishment and are confident the community will join us in providing support for in her work in this new role.  assumes this leadership position from Mr. Doug Trantham who has worked to build and expand behavioral health services for our people and Mr. Trantham will remain as assistant director to continue his work in a reduced capacity.”