Art installation set up on Island 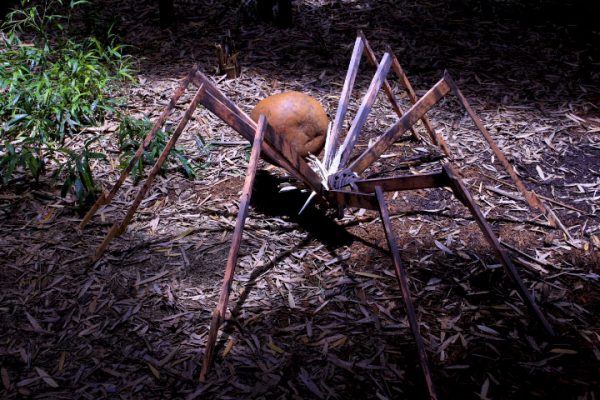 ART: A spider, made of mulberry wood and a gourd, was part of a one-day art installation by EBCI tribal member Jeff Marley and noted book and paper artist Frank Brannon. (SCOTT MCKIE B.P./One Feather)

“The biggest part of this is to actually have some artwork on display in Cherokee,” said Marley, an EBCI tribal member who is the Southwestern Community College Heritage Arts department chair.  “I’ve lived and worked here for awhile, and I haven’t had anything on display.”

Saturday’s installation was a representation of a spider and a web made from mulberry wood and mulberry paper.  It is the second in a series of three installations the two have planned together.  The first installation involved placing sheets of paper in the woods. 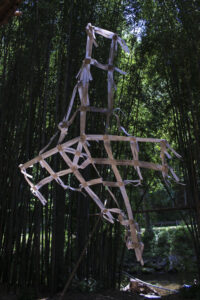 WEB: The web of the installation was made from mulberry paper and contained hidden messages inside.

“There were sheets of paper installed in the mountain,” said Marley, “with the whole idea of ‘who is the library for? How do you access the library?’  And, then with reading a book, as the paper decayed back into the ground representing the knowledge as it is absorbed by us.”

The web in Saturday’s installation was full of meaning.  “The web is made from mulberry, and in the folds, there are some hidden phrases,” Marley explained.  “It relates back to the story of when the first printing press was delivered to the Cherokee Nation.  These guys delivering the press were not Cherokee, and so they could not communicate with people as they moved into the Nation to deliver this.  They were really hungry and how do you get food if you cannot communicate?  They finally ran into someone who could translate for them.”

The spider itself is made of mulberry wood and a gourd.  “It’s just a regular spider,” Marley noted.  “I kind of modeled it after these big, brown spiders that we get at our houses here.  It’s common.  It’s right in front of us, and we usually don’t pay attention until it’s too late and we’re about to run into it.  It’s sort of a commentary on the culture that we don’t really pay attention to ourselves and what we have going on until it’s too late and then we’re in crisis mode.  Like the language, arts and crafts, and more – we get in crisis mode.” 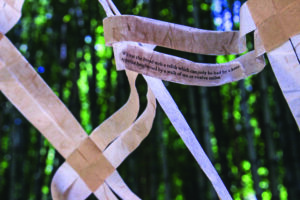 HUNGRY: A message is found in the spider’s web that speaks of a relish that takes a real appetite to stomach.

Brannon, a noted book and paper artist, commented that the two started planning their three installations about five years ago.  On this latest installation, he said, “I’ve been thinking a lot lately about things that are hidden.  Steganography is the idea that something is right in front of you, but you don’t know it.  Different cultures have been able to sneak things during times of conflict.”

He added, “For this work, in the middle, it says pumpkin bread, iya gadu.  Those guys who went to Georgia with the printing press couldn’t find anything to eat.  Finally, they were able to find out how to ask for pumpkin bread.  We have this written in the historic record.”

The spot for the installation also had meaning to the two artists.  “We decided to do it among the bamboo because we were thinking of the invasive nature of bamboo,” Brannon commented. “We were thinking about immigration, and I would equate it with the white people that came here and now are the majority.  It’s a bit of commentary on that.”

Brannon said their work had to be content-driven.  “I struggle with art that has no content.  If it’s pretty, fine; but, there’s too many issues going on right now for us not to think – especially issues relating to immigration.”