BRYSON CITY – You couldn’t ask for more in a high school basketball game than Cherokee and Swain gave everyone on Thursday, Jan. 26.  The Braves (12-5, 8-0) topped the Maroon Devils (18-2, 8-1) by two points (70-68) to take sole possession of first place in the Big Smoky Mountain Conference in a game at Swain Co. that literally came down to the wire.

Holden Straughan, junior guard and leading scorer on the night for the Braves with 20 points, hit a three-point shot with just under a minute left to give Cherokee a 68-65 lead.  Several seconds later, Tye Mintz, Braves junior forward, added two clutch free throws to give Cherokee a five-point (70-65) lead.

Swain rolled back and Evan Bradley, senior guard and leading scorer (22 pts) for the Maroon Devils, hit a three-point shot with just over 11 seconds left to make it 70-68 in favor of Cherokee.

The Braves received a traveling call on the in-bounds pass, and Swain got the ball back with 11 seconds left in the game and a chance to tie the game or win with a three-pointer.  The Maroon Devils drove down, passed the ball around several times, got a quick look at a three-point shot with three seconds left, let it fly…the ball hit the rim and bounced out.  Josiah Lossiah, Braves sophomore point guard, grabbed and ball and held it for the win. 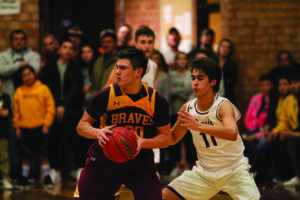 BALL CONTROL: Cherokee’s Holden Straughan (#20), junior guard, sets up for a pass while being guarded by Swain’s Brett Treadway. With 20 points, Straughan led the Braves over the Maroon Devils 70-68 in a game at Swain on Thursday, Jan. 26. (SCOTT MCKIE B.P./One Feather photos)

“You can’t beat an atmosphere like this in a huge game like this,” Sonita Warren-Dixon, Braves head coach, said after the emotional game.  “It reminds me of being in ‘Hoosiers’.  The atmosphere is good, number one is at stake, both teams playing as hard as they can, what more could you ask for?”

The win was Cherokee’s eighth win in a row, and Coach Warren-Dixon chalks that up to hard work and time spent on the court.  “We’ve gotten some game experience, and I’ve had time with these kids that I didn’t have time with so that has helped us.  We’ve had a lot of practices.  We’ve had a lot of game experience, and we have gotten to mesh a little bit.  They learned about me and the way I coach, and it has helped us out.”

Cherokee jumped out early in this contest and led 7-2 in the first few minutes of the first period.  They led by as many as 11 at one point, but Swain plugged along and pulled to within four points towards the end of the period.  Straughan hit a half-court shot from the right side at the buzzer of the first to give the Braves a 26-19 lead. 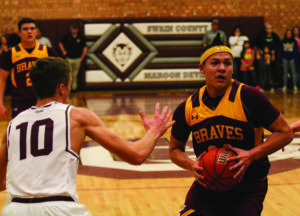 Swain came back in the second period, tying the game and then taking a six-point lead at one point.  Cherokee evened it up – a pattern in this game for both teams, and the Maroon Devils took a one-point 41-40 lead into the locker room.

The third period was close as well with Swain slightly outscoring Cherokee 16-15 to lead by two points 57-55 going into the fourth.  Cherokee outscored Swain 15-11 in the final eight minutes to take the win.

The two teams are set for a rematch at Cherokee on Friday, Feb. 3.

To view or purchase photos from Thursday’s game, visit: https://onefeather.smugmug.com/SPORTS/BASKETBALL/BRAVES-201617/At-Swain-January-26/