The Cherokee Lady Braves did something that no other team has been able to accomplish this season – put a tick in the loss column of the Murphy Lady Bulldogs.  Cherokee won by 10 points (50-40) over the previously-unbeaten Murphy team in a game at the Charles George Memorial Arena on Tuesday, Jan. 24, and, in the process, the Lady Braves took sole possession of first place in the Big Smoky Mountain Conference.

“This was a really big game,” said Chris Mintz, Lady Braves head coach.  “We kind of took control in the second quarter.  They went really cold, and we got a nice lead.  They made a nice, little comeback in the third quarter, and then our ball-handling in the fourth quarter was able to seal the game.” 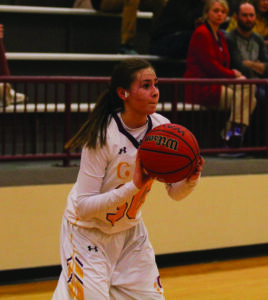 FOR THREE: Cherokee’s Tori Teesateskie lines up for a shot during a home game against the previously-unbeaten Murphy Lady Bulldogs on Tuesday, Jan. 24. With 16 points on the night, she helped lead the Lady Braves over Murphy 50-40. (SCOTT MCKIE B.P./One Feather photos)

Coach Mintz said he’s happy with where his team is at so far this season.  “We’re in first place, and that’s always where you want to be.  We just have to keep going, and the great thing is they’re listening and they’re doing the things I ask them to do.  We executed some things tonight that we’ve been working on, and it paid off for us at the end of the game.”

Tuesday’s game started off slowly with both teams missing some early shots while getting the butterflies out.  Three minutes in, the game was tied at 2-2.  Both teams settled in some, but the game remained deadlocked at 12-12 at the end of the first period.

Just a few minutes into the second period, the Lady Braves made their move.  Jamie Lossiah, sophomore point guard, and Tori Teesateskie, sophomore guard, hit back-to-back three point shots to give Cherokee an 18-12 lead, and they would not trail again in the contest.  Teesateskie ended up leading Cherokee with 16 points followed by Lossiah with 12.

Cherokee extended their lead to 23-12 midway through the second period.  Raylen Bark, freshman point guard, drilled a three-point shot from just left of the top of the key at the buzzer to give Cherokee a 30-14 lead at the half as the Lady Braves ended up outscoring Murphy 18-2 in the period. 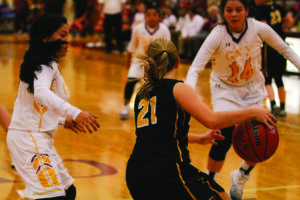 The first four minutes of the third quarter were dead even with both teams scoring five points (35-19), but Murphy went on a 7-2 run in the next three minutes.  The last 1:40 of the third period was a scorefest with the Lady Bulldogs edging Cherokee 8-5, and the Lady Braves led by 8 points (42-34) going into the fourth.

Cherokee maintained their distance and controlled the pace of the fourth period and kept an 8- or 10-point lead throughout.  They went on to take the 50-40 win.

The Lady Braves and Lady Bulldogs have a rematch set for Saturday, Feb. 4 at Murphy.  Coach Mintz said they’ll be ready for another battle.  “We’ve got to just keep them off the boards and keep those big girls from scoring all their points.  We did it for three quarters tonight.  We need to do it for four quarters down there.”

To view or purchase photos from this game, visit: https://onefeather.smugmug.com/SPORTS/BASKETBALL/LADY-BRAVES-201617/Vs-Murphy-January-24/